The Price of War

It is with no small amount of irony and quite a large piece of humble pie that I finally sit down to write this review a full month after the book’s release.  With how much I harped on the poor treatment Mr. Abraham received surrounding the publication of his Long Price series and the single fact that I consider Daniel Abraham to be my current favorite fiction author today, you’d think that I’d be more on top of things when it came to the release of this book.  The U.S. trade omnibus paperback treatment of his story has been a long time coming–longer than I think it had any right to be–but I am supremely happy to see it finally happen.  In my mind, this is one of those stories that deserves all the praise and publicity that can be heaped upon it.
Read the rest of this review »

PATHFINDER (EBR Review), the first book in Orson Scott Card’s Pathfinder series–of which RUINS (Amazon) is the second book–kind of blew me away. I am a big fan of Card’s older work. ENDER’S GAME (Amazon) is a classic. I loved the rest of the Ender series, (the Shadow series not so much) and I loved both WYRMS (Amazon) and TREASON (Amazon). But I have had a hard time getting into his work lately. This series however feels like a bit of that Old Card coming through.

The plot, for those of you who haven’t gotten on board, follows Rigg a boy who can see paths, the paths that humans have traveled in and how recently. To some extent it lets him see the past, who went where and when they did it. I’m gonna get all spoilery of the first book in a second so if you want you can just jump down to the bottom of the review where I will tell you if this is a good book or not (hint: it is).
Read the rest of this review »

I don’t know if I can accurately describe just how excited I was to dive into this book. Mark Hodder’s Adventures of Burton and Swinburne were some of the most amazing books that I read in the last few years. Major anticipation in this corner. So the fact that this book was nothing like I thought it would be, AND ended up being Science Fiction, AND I still really liked it says something impressive about Mr. Hodder and his burgeoning array of great stories.

A RED SUN ALSO RISES (Amazon), to all appearances, is a stand-alone novel in the same vein as Hodder’s previous trilogy and definitely a not book that you’d find Arthur Krystal picking up at your local bookstore. Go ahead and check out the very fine book cover and tell me that it doesn’t make your mind just go, SPROING! Seriously great artwork there. And the story ain’t half bad either!
Read the rest of this review »

Like the hair in your panna cotta, or the blow fly in your bisque, a bad salesman will most often destroy the goodness that surrounds it, no matter how much of that goodness may be available. At least, it will often destroy the idea of large-scale goodness for me. This single idea represents one of the most important reasons why I just couldn’t bring myself to love this most recent read. And yet, I will often pull the fly out and eat the soup anyhow. I mean, who can resist a good soup!

KOP KILLER by Warren Hammond (Amazon), is the third book in his Kop series, but is handled well-enough that it has little problem standing on its own. The story is set on the planet of Lagarto, where the long day and night cycles make for some interesting dynamics, and nearly every inhabitant living there understands that their lives can sink no further than this.
Read the rest of this review »

Emma Bannon is a sorceress in the employ of the Queen herself, tasked with protecting Archibald Clare, an unregistered and failed mentath. Why? Because other mentaths all over Londinium are dying unexplainable and grisly deaths and there’s more to it than a serial killer.

Set in an alternative Victorian England, THE IRON WYRM AFFAIR (Amazon) blends magic and steampunk with enthusiasm. Known for her Urban Fantasy series, Lilith Saintcrow tries something different with a steam-sorcery-mystery tale that threatens Britannia herself.
Read the rest of this review » 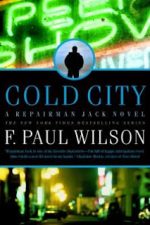 Do you know Repairman Jack? If you don’t, you’ve been missing out on a terrific series of books by F. Paul Wilson. The Repairman Jack series has, over the years, grown into one of my favorite series. It has a near perfect mix of horror and thriller elements while managing to inject humor here and there.

Through the series, I’ve always had questions in my mind about Jack. I know what happened to his mom (and his reaction to it), but what did he do after? How did he meet Julio and Abe? What events forged him into the man we meet in THE TOMB? (Amazon)

Those questions start to be answered in COLD CITY.
Read the rest of this review » 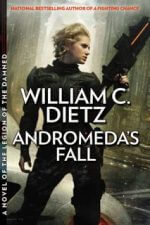 Military Science Fiction, oh how I’ve missed you. In the never ending journey to expand my interests I find that I have neglected my favorite of all genres. The recent release of Halo 4 had me jonesing for a military sci-fi fix. Fortunately, around that time the notorious William C. Dietz asked if I would be interested in reviewing ANDROMEDA’S FALL (Amazon), the latest Legion of the Damned novel.

This marks my first Legion of the Damned novel, and it tells the story of Catherine Carletto, a wealthy socialite. In the blink of an eye Catherine’s life is turned upside down when the Emperor’s sister makes a bold power grab. In order to consolidate power and excise the threat of rebellion the newly crowned Empress has the dead Emperor’s friends and supporters assassinated. Catherine’s and her family fall under this category. Orphaned and on the run, Catherine enlists with the Legion under the alias Andromeda McKee.
Read the rest of this review » 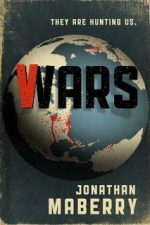 Most anthologies contain a collection of unrelated stories from various authors. That’s just the way it goes. Unless the anthology is done by Baen Books and is set in one of their authors’ worlds, the stories are rarely even set in the same universe. Heck, even the anthologies I’ve written for (THE CRIMSON PACT: Vol 2, 3 & 4) have had very few links to connect anyone’s work.

And then I read V WARS. V WARS (Amazon) is a vampire (mostly) anthology edited by Jonathan Maberry. That name alone should be enough to grab your interest. Maberry puts out quality work 1000% of the time. This anthology is about a global outbreak of a virus that converts the “junk DNA” in some people. Depending on their heritage, those affected by the virus turn into vampires and werewolves (which in folklore are traditionally related).

And the best part is every story is set in the same world under the same calamity.
Read the rest of this review »

One of the anthologies that renewed my faith in short fiction was THE NEW DEAD (EBR Review), edited by Christopher Golden. There were just so many fantastic stories that after I closed the cover, I just sat back and said, “Wow!” Since then I’ve been more than happy to tackle any collection of short fiction, and I’ve read a lot of absolutely stellar work. With all that said, it shouldn’t be too difficult a stretch of the imagination to say that my expectations of 21ST CENTURY DEAD (Amazon) were extremely high. Unfairly so, even.
Read the rest of this review »

Posted: November 23, 2012 by Nickolas in Books We Like Meta: Chris Kyle, Non-Fiction

Nonfiction! What is this black magic? You all must be thinking that I’m a pretty contradictory person. I don’t read books about dragons. I love James Maxey’s GREATSHADOW (EBR Review). I don’t read anthologies. I love ARMORED edited by John Joseph Adams (EBR Review). Now I’m going to tell you that I don’t read nonfiction. Ever. But it turns out that I really liked AMERICAN SNIPER (Amazon), written by Navy SEAL Chris Kyle, with Scott McEwen and Jim DeFelice. An autobiography about a Navy SEAL? Well if you’re going to read nonfiction you might as well read the most exciting nonfiction available.

Chris Kyle served as a Navy SEAL during Operation Iraqi Freedom. Kyle and his platoon were part of some of the thickest fighting the US Armed Forces were involved in, from pacifying Fallujah to cleaning out Sadr City. AMERICAN SNIPER is an unapologetic, patriotic, and personal look at the conflict in the Middle East from the perspective of a special forces sniper.
Read the rest of this review »