While putting together our Best Science Fiction Books page (EBR Archive) I realized that we didn’t have a review up for this book, and decided that I had better put one together. It had been long enough since I’d first read it that I decided to ingest it again. You know, it’s really nice to be able to read a book for a second time (especially after a long while has passed) and find out that you enjoyed the story just as well that time around. I think it says something important about that story. I remember doing that for the main sequence of the DragonLance books by Margaret Weiss and Tracy Hickman (Amazon), which I absolutely loved as a kid. Good stuff.
Read the rest of this post »

After publishing our first “Best of Genre” page, one of our readers suggested that we pick up something by David Gemmell. Gemmell is an author that I’ve been meaning to read for like… mmm, forever. Back in the day, I got started on Dragonlance though, and after my first taste of that series, I really didn’t wander into other books all that much. Still, there’s a freaking award named after this guy (one that I hope never gets renamed) and that has to mean something of significance, right? Luckily, I found a slightly used copy of Legend at a local used book store for like four bucks (total steal for me!) and dove into it.
Read the rest of this post » 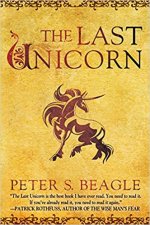 Patrick Rothfuss called this “the best book I’ve ever read.” His love for THE LAST UNICORN explains the tone and texture of his THE SLOW REGARD OF SILENT THINGS EBR Review, which I loved, and it was Rothfuss’s endorsement that prompted me to get in the Way Back Machine and read this classic. I’m glad I did.
This breezy gem-of-a-book is hard to describe. I find myself at a loss because anything I write will be so inferior to it and I’d like to do THE LAST UNICORN justice. There is poetry on every page. To say I identified with the characters and that they were sympathetic is like saying that a quiet cloud drifting past a shining, amber harvest moon is beautiful. (If you hated that, then skip this; you will not enjoy 1960s era whimsical fantasy.)
There are no cardboard figures, no noble savages, this being near the beginning of the anti-hero era in literature and cinema. The nuance we hope for is present throughout, so even the really-bad bad guy is […]Read the rest of this post »

A timeless classic is a term that should be uttered rarely. Timeless implies you could pick it up today, read it in ten years, and still come away with a new perspective, a new rage at a book that challenges you politically, socially, and spiritually. DUNE, the grandfather of modern science-fantasy, in my opinion, of course, is the black sheep of the pulp Science Fiction family that ran away from a raygun shooting, fish bowl shaped, space helmet wearing universe of tomorrow. Instead, it is a morality play in line with Shakespeare, a political examination of tyranny, prophecy, good intentions, and how a tiny, insignificant planet holds the real-politik resource to create or destroy galactic dynasties with a simple drop of an atomic bomb. Even if its vision of the future is a wrong-way mirror compared to the projections of today, it cannot be overstated how vital, how genre-changing it was to the language, the imagery, and the soul of Science Fiction. DUNE deserves all its accolades both in terms of story, theme, character, and its sprawling, fully realized false future that never came to be.

DUNE (Amazon), the first in a long series of novels by Frank Herbert, tells the story of humanity millennia in the future. Certain technology is suspect, due to dark atrocities brought about by atomics (atomic bombs and other atomic-powered technology) and robotic uprisings, in the vein of contemporaries like Arthur C. Clarke. The universe is ruled by a galactic emperor who divides planets into the stewardship of noble houses. Within this viper’s nest of nobles clashing against each other, there are monastic orders like the Bene Gesserit, an all female order of psionically gifted matrons manipulating a genetic conspiracy for millennia, who vie for influence and control within the Galactic Padishah Empire.
Read the rest of this post » 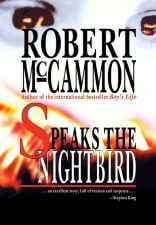 I recently went back to do a re-read of Robert McCammon’s SPEAKS THE NIGHTBIRD (Amazon). Though, I suppose, a “re-listen” is more accurate as I bought the audiobook. It’s been a long time since I read this novel, and with the sixth Matthew Corbett novel, FREEDOM OF THE MASK coming in just a few short months, I wanted to go back to Matthew’s origins as a refresher.

It is incredible how well this novel stands up to multiple reads.

SPEAKS THE NIGHTBIRD follows a young Matthew Corbett as he participates in the trial of Rachel Howarth, who is accused of murder and witchcraft. Th novel channels the fear, suspicion, and paranoia of the Salem witch trials which occurred just six years before the events of this novel. This is before Matthew’s days as a “problem-solver” that we see in QUEEN OF BEDLAM (Amazon) and beyond, and seeing the near-innocent (in adult matters) attitude and world-view Matthew has in NIGHTBIRD is so interesting.
Read the rest of this post »

The Hero and the Crown

With all the popular YA novels out there sporting wishy-washy teenage ‘heroines’, it’s time to introduce you to a classic that does it right. For the kids of my generation there was Robin McKinley’s THE HERO AND THE CROWN (Amazon), the winner of the 1985 Newbery Medal Award.

Aerin is the only child of the king. The problem? She’s a girl. Since her deceased mother was a foreigner (and it’s whispered she was a witch), and Aerin has inherited her pale skin and red hair, she’s snubbed and ignored. She discovers a book about the dragons that used to threaten Damar, and on her own learns how to make kenet, an ointment that protects the wearer from the effects of fire, and trains herself to fight dragons. When word comes that a local village is being terrorized by a small dragon, Aerin with the kenet and her father’s old war horse, goes to fight it. Unfortunately, it’s not only the smaller dragons who begin to return.
Read the rest of this post »

The first book of Mary Stewart’s Merlin trilogy, THE CRYSTAL CAVE (Amazon), was written in 1970 and continues to be one of the most accessible novelizations of the mythos surrounding the Arthurian legends. Told in first-person PoV as though it were an autobiography, Stewart writes about Merlin’s childhood as he travels across Britain, the people he encounters, and the discovery of his magic–all in her lovely prose with detailed attention to the landscape and era.
Read the rest of this post »

Believe it or not, a lot of thought goes into our selection of Elitist Classics.  Our selection of Classics goes beyond our personal likes and dislikes. The funny thing is how, many times, each member of the EBR crew will say, “This is totally a Classic!”… and none of the others have read it. And by others I usually mean me. Especially in the realms of Science Fiction.  The reason? Heck if I know. I think I tend to focus on new releases, and there’s nothing wrong with that.
Read the rest of this post »

Conrad Nomikos is not what he first appears. On the outside he seems to be in his thirties, walks with a limp, one side of his face is disfigured, and he has a government job working with Earth’s antiquities. Dig a little deeper and you learn that he’s been working that job at least twenty years, he knows the most powerful and influential people on a first-name basis, and he talks about historical events in a more intimate way than most.
Read the rest of this post »

Doesn’t that sound exciting? Don’t you want to read that book right now?
OK I jest, but in all honesty if you have a problem with Dolphins crewing a starship and getting stranded on an alien planet than this book isn’t for you.
Read the rest of this post »