We're a small group of people that just happen to have better taste in books than you. :) Aside from being completely awesome, we also read lots of books and love to give out our opinions like candy. What's your favorite flavor? Science fiction? Check. Fantasy? Double-check. Horror? Can't do without a little of that. So find yourself an awesome chair or comfy nook quick, because you're about to find a whole lot of recs for a whole lotta great books. 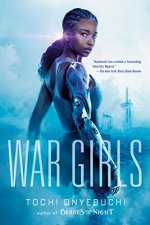 Citing a long history of erasure and silence surrounding the Nigerian civil war, author Tochi Onyebuchi wrote WAR GIRLS (Amazon) to illustrate the way that the tensions that incited the conflict–economic, religious, tribal–exist today and how they might play out in a post-apocalyptic future. I didn’t know any of this history when I started the book and the story stands admirably on its own (interested readers can find additional reading in Onyebuchi’s afterword).
Read the rest of this review »

A Plague of Giants

Posted: September 1, 2020 by Vanessa in Books We Like Meta: Kevin Hearne, Fantasy

There are five known magical ‘kennings’ or types: air, water, fire, earth, and plants. Each nation specializes in of these kennings, and the magic influences the society. There’s a big pitfall with this diversity of ability and locale–not everyone gets along.
Read the rest of this review »

The Orphans of Raspay

Lois McMaster Bujold’s delightful series of novellas featuring Penric and his demon Desdemona continues with “The Orphans of Raspay” where Penric becomes hopelessly caught up in the sad situation of two orphan girls. If you haven’t read the previous novellas, go check them out, starting with “Penric’s Demon” (EBR review), where you’ll get my opinion on the Audible reader as well as the low-down on what it means to be a sorcerer with one’s own demon.
Read the rest of this review »

Posted: August 21, 2020 by Vanessa in Books We Like Meta: Leigh Bardugo, Fantasy 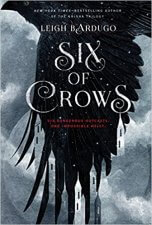 Kaz is a lieutenant for one of the crime lords of Ketterdam. He’s made a name for himself, mostly because he’s willing to do anything for money. And when he’s offered an insane amount of money for a job that may get him killed, he takes it. If anyone can out-think an impossible situation, it’s Kaz Brekker.

But he needs the right crew if he plans to pull it off.
Read the rest of this review »

Posted: August 7, 2020 by Vanessa in Books We Like Meta: Marie Brennan, Fantasy

“Last” is the name of a man you can hire to lead you through the confusing realm of Driftwood. But that’s not the name he was born with. If he can remember back that far.

First you need to understand Driftwood, a realm where dying civilizations get caught up into its black hole (not really any way to explain it, even though that’s not what it is). At first their neighbors disappear. Then their boundaries. Then they find themselves with new neighbors of different worlds, races, and languages. And all of them are moving toward the inexorable deterioration of their society until it disappears completely. It may take a few generations (depending on the life-expectancy of the natives), but their apocalypse is inevitable.
Read the rest of this review »

A lot of books can’t wait to reveal all of their secrets. Others dole them out slowly, reeling the reader in little by little. And while unintentional disorientation is the sign of bad writing, intentional disorientation can be fun. It requires a little more work and patience from your reader, but once you figure out the game, it can heighten the pleasure inherent in reading, the tension and relief of revelation.
MIDDLEGAME takes the ‘low and slow’ approach, revealing its secrets bit by bit. It’s effective because McGuire centers a complex story structure around compelling and simple character stakes to make an unusual story.
Asphodel Baker, a talented alchemist who was ignored and underestimated because she was a woman, had a big idea. She wanted to embody the Doctrine of Ethos, which McGuire describes as the “balance between language and mathematics” (kindle location 108). Basically Baker believed that these two forces shape the world, and could bring magic back into it if […]Read the rest of this review »