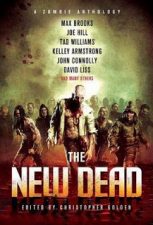 THE NEW DEAD (Amazon) is a zombie anthology (surprised?) edited by Christopher Golden, and it goes by the title ZOMBIE in the UK. Included in this collection are stories by Tad Williams (the guy’s is everywhere lately), Jonathan Maberry, Max Brooks, Mike Carey, John Connolly, Joe Hill, Kelly Armstrong, and a bajillion others. This was one of the few short-fiction collections that really had us excited, and we were lucky enough to get a copy sent to us by Jonathan Maberry’s publicist for review purposes.

The short version? This was an excellent collection. Long version? OK fine, we’ll give you that too.

Typically, short-fiction is hard for us to read, not to mention review. Most of the time we begin a short-fiction anthology, and can’t even finish it. Of course, at that point, it isn’t worth writing a review about, and it wouldn’t be worth your time to read the review of the terrible collection. THE NEW DEAD, however, was quite different. While there were a few throw-away stories (like there are in every anthology), a majority of the stories were fantastic.

Now, what makes a good zombie story? Is it the fact that corpses are running around eating people? Or that “survival-horror” element? The way people deal with an apocalypse? The humor inherent in chase scenes involving slow-moving, animated corpses? Or is it the concept of resurrection? Well, the truth is ALL of these have potential. Luckily, since this is short-fiction, we get to see all of these ideas in action, and we get one of the most entertaining reads of the year thus-far.

If you a fan of Zombie stories like we are, you should go buy the collection of shorts in THE NEW DEAD.

The opening story by John Connolly, “Lazarus,” is a different take on the resurrection of Lazarus in the Bible. Jonathan Maberry’s “The Family Business” is a tale of a young boy trying to figure out his place in a post-apocalyptic zombie world. It was one of the standout stories, and thankfully, Maberry is taking it and expanding it/reworking it to be a YA series titled ROT & RUIN–the full length novel will be released later this year, and we are anxiously awaiting the advance review copy. Max Brooks, of course, give us a story from his World War Z creation, which was fantastic. We were surprised to find a story by Mike Carey (author of THE DEVIL YOU KNOW). It’s about a stock trader who consciously becomes a zombie so he can keep working without needing rest. For a guy known primarily for Epic Fantasy, Tad Williams has the story that was Steve’s favorite. It has an Urban Fantasy feel to it, with a slight Lovecraft stylistic approach. Yeah. It was fraking awesome. The most surprising story? Joe Hill’s (if you didn’t know, Joe Hill is Stephen King’s son) story told in Twitter tweets. We initially figured it would just be too odd to be good, but it turned out to be surprisingly funny and simultaneously horrific. It follows a girl Tweeting from her family vacation, and their trip to The Circus of the Damned.

Look, if you a fan of Zombie stories like we are, you should go buy the collection. It will run you around $15, and it’s a trade paperback, though we would have happily paid a hardback price for it. Seriously, we didn’t even talk about Kelly Armstrong’s story, or David Liss’ story (we have to leave you some surprises after all). This just has too much good Zombieness in it to be ignored. It is seriously one of the most entertaining anthologies we have read. Period. Good job, Christopher Golden.