Posted: May 21, 2019 by Vanessa in Books We Like Meta: Elizabeth Bear, Epic Fantasy

Once upon a time, the Alchemical Emperor created an empire among the ruins of former kingdoms. With his own magic he created a palace like no other. Now his posterity fight over the fractured lands inherited by his children. Two ranji queens rule the sister Sarathi palaces, but their two male cousins (each cursed with the inability to procreate their own heirs), attempt to take power for themselves via subterfuge or outright war.
Read the rest of this review »

Ever since those years ago when Mercy moved to a trailer house near the home of the Columbia Basin Pack’s alpha, her life has been drastically different. She sometimes wonders if it’s because she became involved with Adam and his werewolves, but she understands that her relationship with Coyote, the god of chaos more likely has something to do with it. If you read book #10, SILENCE FALLEN (EBR Review), when Mercy was kidnapped by the vampire king of Europe, we learned that Coyote does have his hand in influencing events, and uses his children to clean up the messes that disrupt the world. I suspect that is the reason why Mercy’s life has grown more dangerous over the years.

That’s what she gets for being Coyote’s daughter.
Read the rest of this review »

In a world where immortality means death is no longer natural, scythes are employed to keep the population under control. Rowan is a typical middle child in a big family whose life flies under the radar. Until the Honorable Scythe Faraday notices him and asks him to become his apprentice. Citra excels at school and when a scythe comes to their house just to have a meal with them, she can’t help but question his behavior. They both — reluctantly — end up as apprentices to the same scythe and are dropped into a world of death, pain, grief. They must learn how to kill, but also be compassionate. Scythe Faraday believes that a scythe shouldn’t enjoy killing.

But Scythe Faraday is old school, and there are newer scythes who think that there are too many restrictions, that there are better interpretations of the scythe 10 Commandments. When conclave arrives and Citra and Rowan must take their first tests of their apprenticeship, events go poorly and they learn the hard way that death has become a political battlefield.
Read the rest of this review »

It’s been a while since I read the first book of The Witchlands, TRUTHWITCH, so I was a little bit lost when starting WINDWITCH; fortunately I already have book three, BLOODWITCH, ready to read soon, so I won’t suffer quite so much. This might be the kind of series that would be easier to read in quick succession so you aren’t lost. So much happens over the series that if you do go a while between books, a refresher would be in order, since Dennard starts the story back up where she left off, without much reminders.

WINDWITCH easily improves on TRUTHWITCH, despite our heroines being separated at the end of TRUTHWITCH. Dennard builds on everything that went before, on the characterization, on the story, on the magic, on the world–all toward creating a world with more depth, which I rather like seeing in a YA series.
Read the rest of this review »

Posted: March 28, 2019 by Vanessa in Books We Like Meta: Martine Fournier Watson, Fantasy

One cold winter morning in the early hours, a young boy leaves his home to follow the moon — but then disappears.

Not many hours later a peddler walks into town pulling his cart of wares and finds himself in the midst of a search for the boy and volunteers to help — until the boy’s body is found in the river and he instead finds himself in a grieving town.

The traveling salesman turns out not to be your average peddler: this one sells dreams, made to order, satisfaction guaranteed.Read the rest of this review » 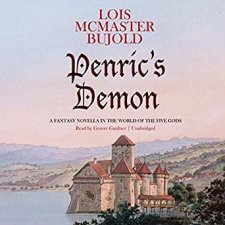 PENRIC’S DEMON is the first story in a 6-novella series (so far? hopefully there will be more?) written by the amazing Lois McMaster Bujold. I just finished listening to all six on Audible and I’m here to tell you that they’re worth your time, and reader Grover Gardner enhances the story the way a reader should.
Read the rest of this review »

Last week in my interview with S.K. Dunstall (see it here), they mentioned loving Martha Wells’ Murderbot stories. With such high praise from an author-duo I enjoy, how could I resist?

I’ve been missing out. Murderbot is totally worth reading.
Read the rest of this review » 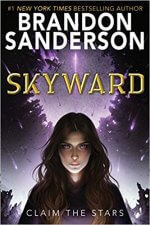