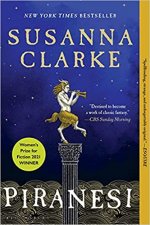 When I watched the season of “Jonathan Strange and Mr. Norrell” I loved it. I loved how weird it was, the strange characters, the fascinating and crazy story. Totally my speed. So when my book club decided to read another of Susanna Clark’s books called PIRANESI I was on board. And like her previous books, it is just as weird and mind-bending.

Her main character, Piranesi, lives in a house unlike any you’ve experienced. Its rooms are infinite. The corridors are like a labyrinth. It’s set in the middle of an ocean, surrounded by water and affected by the tides, which can dangerously flood the rooms if you don’t know them. Fortunately, Piranesi understands the tides and has mapped the corridors and rooms–in fact he knows the house so well it’s almost like a living extension of him.

He lives alone, except for the occasional seabird who uses the house as its nesting ground. The only human he sees is The Other who comes regularly to interview him about the house and asks for help to research A Great and Secret Knowledge. But the more Piranesi learns about the house, about his real relationship with The Other, and the eventual appearance of a third person, the more he begins to understand what is real and what isn’t.

At least he thinks he does. He’s been keeping a journal for years. But recently he’s come across pages written by someone else, or at least they look surprisingly similar to his own journal pages. They couldn’t have been written by him, could they?

An otherworldly house, the search for magic in the modern world, and a man's discovery of himself makes Piranesi an strangely worthy story.

Piranesi is a short, quick read, and my book group spent a lot of time talking about this story, its mystery, the strange connections between these people, and how all of this was revealed over the course of the story. Clarke uses a fair amount of symbolism in the story, mythology, and literary Easter eggs–and it was fun to try to pick some of this apart. But ultimately it was the story between Piranesi and The Other that really engaged us. Why was Piranesi stuck in the house? Why couldn’t he ever leave? How did The Other come and go? Why was this place so strange, where was it, why did it exist?

There are a lot of questions as you move through the story, several things that don’t make sense or are unexplained inconsistencies, and the pace can seem slow because of the worldbuilding involved. And these aren’t small problems. This book is not for everybody. Its inconsistencies will drive some people crazy, while others will find it delightfully strange and beautiful. It can be both of these things at once. Its themes of exploring self, exploitation, the search for truth, what is real and what isn’t–these make it an interesting story, deeper than the one the surface. So if you’re looking for a book that’s both story- and character-oriented, this may not be for you. But if you’re looking for a story that explores ideas, this is a worthy discussion starter.