A Plague of Giants

Posted: September 1, 2020 by Vanessa in Books We Like Meta: Kevin Hearne, Fantasy

There are five known magical ‘kennings’ or types: air, water, fire, earth, and plants. Each nation specializes in of these kennings, and the magic influences the society. There’s a big pitfall with this diversity of ability and locale–not everyone gets along.
Read the rest of this review »

If you read the first two books — KILL THE FARM BOY and NO COUNTRY FOR OLD GNOMES — you will discover that THE PRINCESS BEARD has much the same tone, a silly storyline, and genre twisting galore. Yep, it’s as fun as the first two. Let’s dig in, shall we?
Read the rest of this review »

SCOURGED is the final book in The Iron Druid Chronicles and we get it all: war (Ragnarok!), character growth, teamwork, comeuppance (multiple instances), and even a little romance. But how does Hearne deliver?Read the rest of this review »

Take every fantasy trope, every dungeon crawl, every fairytale stereotype and put them in a bag, smash the bag with a hammer, then dump out the pieces and you get KILL THE FARM BOY. It’s a romp of a book, with clever turns of phrase, goofy characters, a quest they don’t realize they’re on, all while poking fun at every fantasy book you’ve ever read. Terry Pratchett would be proud.
Read the rest of this review » 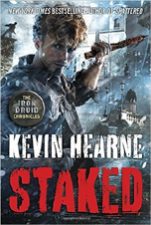 In the meantime, Granuaile is busy finding a way to cloak herself from the prying eyes of Loki, and Owen is beginning to train a new generation of Druids. To find success in their respective quests, our heroes often get side-tracked, but always with their eyes on the prize: preventing Ragnarok.
Read the rest of this review »

Posted: March 25, 2014 by Vanessa in Books We Like Meta: Kevin Hearne, Urban Fantasy

Atticus and Granuille are in trouble. Of course. But the stakes are higher than usual. The Norse god of mischief, Loki, is on the loose and needs to kill Atticus before he can start the Apocalypse. At the same time our favorite Druids are being tracked by the goddesses of the hunt themselves–Artemis and Diana–in retaliation for giving Dionysus grief in TRAPPED (Amazon). The only safe place for them is in the world of the Tuatha De Danann, but the only way they can get there is to find a gateway on English soil, and they must run fast across Europe if they want to live.
Read the rest of this review »

Posted: July 6, 2011 by Vanessa in Books We Like Meta: Kevin Hearne, Urban Fantasy

Atticus O’Sullivan is older than he looks. By about two millennia. But that hasn’t stopped him from trying to lead a normal life in Tempe Arizona.

Unfortunately, when a human has lived for 2000+ years one is bound to make some enemies, and his archenemy is none other than the Celtic god of love, Aenghus Óg. For a god of love he’s actually a pretty nasty guy.

A while back—a long while back—Attitus got his hands on the magical sword Fragarach from one of Aenghus’ military generals. The god has been trying to get it back ever since; he’s been sending his minions to do his dirty work, and Atticus has been doing a pretty good job avoiding trouble. But now Aenghus is finally coming to finish the job himself.
Read the rest of this review »