Review: Expedition to the Mountains of the Moon 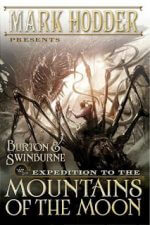 In my experience, history is a dry and rather boring subject that has made me more prone to “study by osmosis” than other, obviously more effective, methods of gray-matter absorption. There has been but one exception to that rule in my short lifetime, and that exception was my high school AP history teacher. History was not just another subject for her. History was LIFE. It had substance, it had breath; it had body and it had soul. Her passion for the stories of history and the people that populated those tales made me open my eyes and want to learn–not just to get a good grade in the class, or to see what I might glean from mistakes of the past, but to feel and know what it was like to be a part of that past. She made me love History, and no one else has ever had that same effect.

EXPEDITION TO THE MOUNTAINS OF THE MOON by Mark Hodder (Amazon) is the third book in the Burton and Swinburne series and continues the tale of an alternate version of our own history’s Victorian England. It is a world filled with the power of science and steam. It is a world gone horribly awry–a world in which flora and fauna have been genetically altered and grown in giganteum to provide the utmost to mankind and their myriad devices. It is a story of a world fraught with the danger of extinction by forces and powers that were never meant to be wielded by the people of such an age. And yet, even though it’s a fantastical world, it’s populated with actual figures and places from our past, and what’s not to love about something like that?

I think I’m going to have a difficult time relaying just how ridiculously much I enjoyed this novel. Right from page one, when Sir Richard Francis Burton is hiding beneath a bush to try and get a good shot off at Spring-Heeled Jack–a character from the very first book in the series and the divergence point for all of the mass-chaos and mayhem that has ensued ever since–I knew that I was going to love it. I would think that anyone who reads it would.

There are two main story-lines to this book, and each is immediately distinctive. The first is told mostly from Burton’s point of view as he’s traveling toward the Mountains of the Moon, and the oft-thought-of and once sought-after source of the Nile River, at the behest of the Prime Minister of England, Lord Palmerston. The second story-line is also headed by Burton, but in this one he’s suffered a mild form of amnesia and thrown into the war-torn fields of Africa forty years into his future. I know. Amnesia? When was the last time you actually read a book anywhere near half-good wherein a main character had suffered any form of amnesia. I agree, but Hodder totally pulls this one off. It’s so well-done, with locations and events naturally triggering Burton’s memories and not seemingly at the author’s whim, as so many other attempts I’ve read have sounded.

As with our previous outings with Burton and Swinburne, characterization is great, pacing is break-neck, and imagination soars through the upper stratosphere. Spider-Harvesters, flying fortresses, carnivorous plants, and even plant-human hybrids filled the pages with so much fun that I honestly had a hard time keeping up with it all. Another of the great things that Hodder has done with this novel is bring nearly all of the characters from the previous books into play again and then knock a bunch of them off. And let me tell you, my heart twisted each and every time one of them was lost. I’m not a man for tears when reading novels, and twice during this ride I was brought closer than I’d been to that point in a long, long time. The value and importance of every secondary character in this series was driven home by this book. Awesome. Just awesome.

EXPEDITION TO THE MOUNTAINS OF THE MOON is a spectacular way to close the 3-book story arc, while leaving room for more stories (yay!).

And I even got more parakeets. Ha! Well, that’s actually a pretty large understatement. What I really got was a veritable tidal wave of parakeets, and let me tell you, I couldn’t have been more pleased.

The end of the book was completely satisfying for me, though it certainly didn’t leave everything tied up with a bow. It was, however, a spectacular way to close the three-book story arc that started with The Strange Affair of Spring-Heeled Jack. If there’s any possibility though of this being the end of line for these two fine gentlemen, you very well may find me curled up in a closet somewhere, sucking my thumb. There’s definitely room for more stories here, and if given the opportunity I will devour every last word that I’m able to get my hands on.

Hodder has completely won me over with this series. Finding authors like Mr. Hodder is the single-most important reason why I read. What more can I say? Buy these books. Read them multiple times. They are just that entertaining. May this only be the beginning of his long and illustrious career.

Stop screwing around and buy this series.