Review: The Curious Case of the Clockwork Man 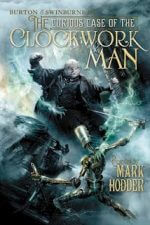 Every once in a while I come across a book, or series of books, that totally yanks the carpet out from under me. I don’t expect more than the ordinary when I pick ‘em up (other than, perhaps, noticing the amazing cover art). I plop myself down in a chair, open the thing up, and quite simply just get to it. Then it reaches out, smashes me in the face with its awesomeness, and says, “You love me!” Leaving me with naught to do but obligingly respond, “Yes. Yes I do.”

THE CURIOUS CASE OF THE CLOCKWORK MAN (Amazon) is the second of three planned Burton and Swinburne novels written by Mark Hodder and, after reading its predecessor, was every bit the book that I had hoped it would be. If any of you missed the announcement, Mark Hodder recently won the 2011 Phillip K. Dick award for THE STRANGE AFFAIR OF SPRING-HEELED JACK (EBR Review). Awesome that he won it? Yes. Even if I did have a few problems with the book, I still think this guy deserves the praise. So if there are any doubts niggling your brain as to the possibility of goodness in this second book, let me disabuse you of them forthwith.

Well, okay, not really. He’s actually just trying to catch a break and get back to finding the source of the Nile, which, if you remember from the first novel, was one of his driving passions prior to SPRING-HEELED JACK. It isn’t long before he comes across the Clockwork Man of the title and things get moving. Immediately, Burton is entrenched in mystery and danger, and we very soon start to see the development of the much larger story of interest for the trilogy: discovery of the Eyes of Naga, several black stones of interest that came from a meteorite and have provided some very mystical powers to people, indeed. His search takes us down into the city sewers, out into the country, searching through lost legends, and quite literally down into the belly of a beast. Frankenstein-like monsters, ghosts, mind-control and more warp the very fabric of the pages. Nothing short of a barrel of fun.

This book had so many high points. Hodder’s prose is again super easy to read. When combined with the rapid evolution of the story, the pacing of the book stayed fast and furious. One of the things I was really happy to see was the development of Swinburne as a character. My impression of him from the first novel was less than stellar. He came across as somewhat of a peculiar ne’er do well with a penchant for mild philosophy. This time through, he not only adds to the plot but makes for a regular source of humor that had me in stitches more than a few times. Aside from this, Burton continues to get better, and I was absolutely enthralled by his character as he put the pieces of the various puzzles together.

Every once in a while I come across a book, or series of books, that totally yanks the carpet out from under me, and that's the case with THE CURIOUS CASE OF THE CLOCKWORK MAN.

Hodder is also very concerned in this book with how the world has changed as a result of the events in SPRING-HEELED JACK. The world is moving on from its divergence point, and the countries of Europe specifically are evolving at a frenetic pace. War is coming to Europe and its nations, only this time it’s powered by the Eugenecists and their newly-mangled scientific fare. All of the Eugencist-created cornucopia from the first book is here again, plus more. Giant swans that pull massive kite-conveyances through the air. Loads more insult-laden parakeet messengers. (Thank you!) Garbage eating crabs that incinerate trash left upon city streets. Massive millipedes that have been slaughtered, scooped out, and turned into cheap structures for city buses. Just wow. And, of course, there are the Clockwork Men. Yes, you noticed. There’s more than one. 🙂 Oh. And book three is set up absolutely perfectly, people. Can you believe that? A second book that not only preps for the next in the series but has a complete story as well? Seriously. How often do we see that?

There were only a few minor blips for me. The first is something that I see in nearly every mystery novel, so it’s somewhat forgivable. It’s the portrayal of a scene where the main character (Burton, in this case) finally knows what’s going on and deliberately withholds the information from us. (As in, “Burton explained to everyone in the room what was going on. Then he laid out his plans to them.”) Annoying, true, but given the quick pace of the novel it wasn’t very long before I found out what was happening anyhow, and so I can only complain so much about this. A second point is that the Clockwork Man of the title really only sets off the initial search, and though he was involved in the events that eventually played out (to great effect, I might add) he was never pivotal to the mystery. So, although I liked the title, based on the Clockwork Man’s involvement in the story, I probably would have changed it. Okay, now I’m quibbling. Can you tell that I just loved this book? I’m complaining about the title for crying out loud! Lol.

On the whole, this series completely reminds me of the great Sherlock Holmes stories. In fact, I think that if someone doesn’t pick this series up and make a few movies out of it, it’ll be an entirely massive disservice to the entire world. The books would lend themselves perfectly to that medium, paralleling the Sherlock Holmes movies, which I loved, that have recently been released. In a movie-world full of copy cats I’m surprised that someone hasn’t already done a Sherlock Holmes movie mock-up. If someone picks this one up, and does it right by staying true to the story, they could easily come out on top.

Can’t wait for the next!