Review: The Return of the Discontinued Man 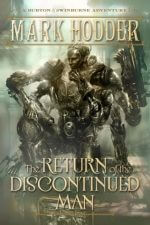 Burton and Swinburne, huzzah! Can I tell you how excited I was to read this novel? Ridiculously. These novels have been part of my staple, my core, my life-blood’s source for brilliant storytelling. Each time I return to them, they never fail to impress and entertain me. Hilarity, imagination, and excitement all wrapped up with a neat little bow.

THE RETURN OF THE DISCONTINUED MAN (Amazon) is the fifth novel in the series of Burton and Swinburne adventures, and from what I’ve been led to believe, the penultimate book for the series. This book picks up where Abdu El-Yezdi left off, with the man himself dying and leaving Burton in a pickle. The book starts out with a bang as our favorite, psycho from the beginning of the series returns to us yet again. Yes! It’s none other than Spring-Heeled Jack come back to haunt Burton and Mr. Swinburne alike. But’s he’s there for Burton and none other, and consequently proceeds to destroy several locations around London while in search of our hero. While chasing these phantom appearances of his old nemesis, Burton begins to have trances and hallucinations of alternate realities and histories, and he starts to suspect that the Saltzman’s Tincture he’s been using for all these years may just be beginning to affect him in a negative way. These events lead the explorer to launch off on another wild adventure with Swinburne and the gang; this time into the far future, where someone, or some thing, has taken over London and is set on Burton’s destruction.

All the original cast are back in this book. Those that survived and those that have died (once or several times), alike. These characters are used and reused, mal-aligned and twisted, broken, chewed up, and spit out. Some have changed sides. Some have stayed the course. They’re all familiar and fun though to those that have read through the series thus far.

The really fun part is that so many (if not all) of the people in these books have an actual attachment to someone in history. These characters are based on real people that lived several centuries ago. Although, one of the characters that is new to the series in this novel, Mick Farren, was still alive at the outset of writing it. Hodder’s Afterword, where he talks about pitching the idea to the man, was perfect. His words, heart-felt. There has always been a perceived connection for me between Hodder and the characters in these novels because of the Appendix that he always includes, but this time his words about Mick Farren and the role that he played in history (both Burton-styled fictional and non-) showed me just how much these characters mean to Mr. Hodder.

This series is my source for brilliant storytelling. Hilarity, imagination, and excitement all wrapped into one story. Burton and Swinburne at their finest.

As usual, the pacing of this book was breakneck, the story wild and absolutely chock-full of imagination. The result was a fun and mind-blowingly inventive novel that kept me on the edge of my seat the entire time. Not just that, but Hodder’s ability to keep everything clear is what made the extremely fast pacing of the book possible. Hodder’s ability to help readers know just what is happening, and when, and to who is brilliant. Again, it comes down to clarity. How many times have we seen it botched? And just how great is it that Hodder can pull off all of this with such seemingly casual flair? Genius. Sheer genius.

By the end of this novel, we have yet another major twist to not only the story, but to who and what our two heroes have become. I can’t say enough good about this novel.