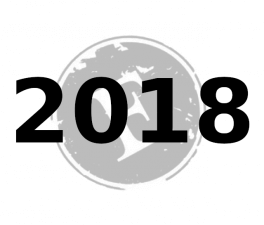 2018 was a bit of a crazy year for us here at EBR. We started by throwing off the shackles and supremely annoying ads of WordPress.com, and leaving behind a website that was doing essentially nothing for us with regards to helping us find more readers.

The new site has been a labor of love, and a copious number of hours have been spent by the team in hacking and slashing the reviews we’ve posted over the last ten years (yeah, ten years people!) and trying to figure out how best to restructure the site to make both our readers and search engines (Google) love us ever more.

We held a contest for and opened our doors to a couple new reviewers — Yea, new reviewers! — and have loved what they’ve been able to add to the site. We’ve tackled in earnest the social media sphere and have picked up a growing number of followers there on multiple different platforms. From the look of things, most of the rocky is done and over, and the future is looking up, up, up from here.

Along the way, we’ve tried to stay pretty regular about getting at least two reviews out every week. Sometimes that was difficult. Other times, not so much. Life, as they say, has a tendency of getting in the way, and everyone here at EBR has their own chaotic life that underpins the volunteer work of writing awesome reviews for your benefit.

So, to to finish the year off, we’ve put together a list of those books we thought were the best of those we read along the way.

Overall, we think they were pretty dang good. If you missed any of them, you might want to rectify that. 🙂 If you read any others that were uber-fantastic and you think we should repent… well, leave us a note about it below. We’ll try to look past your impertinence and decide if we think they’re our cuppa tea or not. If so, on the pile they’ll go.

We’ll try our best, anyhow. Because honestly, there are a lot of books we’re expecting to have fall into our greedy little hands any day now. Some of those we’re actively drooling in anticipation for this year are:

Whoa. That IS a lot of books. 🙂 Not to mention, there’s still a few from 2018 we still haven’t made it to that look like they’re going to be uber awesome:

We also felt that we needed to mention a few authors we really want to see something new from, but haven’t heard any official stirrings of publication as of yet:

Jeff Salyards — New series take time. We get it. Still.
Ian Tregillis — You too, Ian? Dang. Yeah, yeah. New series and all that jazz.
Scott Lynch — Okay, so we’re still holding out for this guy. Don’t call any of us crazy.

Anyhow, here’s to another great year for EBR and more awesome books from the authors we love. Tell all your friends and neighbors about us, will ya?

Looking to scan through the reviews we wrote in 2018? We’ve got you covered. Check em out here –> (EBR Archive).

And for those of you that are especially on top of your game… yes, we know that we’re currently lacking a “Best of 2017” list. Rest assured that one is in the queue and coming soon.