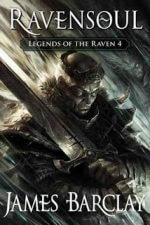 DEMONSTORM (EBR Review) was the end of the Legends of the Raven series. Main characters died horrible and glorious deaths. As readers we all shed a collective tear (or twenty) at the sacrifices the characters made. But then James Barclay wrote another end to the series with RAVENSOUL. I mean, really, what’s a guy to think? There wasn’t really any room to add onto this story. It was done.

Or so I thought.

James said an interesting thing to me in an email that I think really changed my viewpoint on the novel for the better. He said that DEMONSTORM is the end, but to think of RAVENSOUL as a bonus story full of closure. Having read RAVENSOUL now, I can say that this helped me a great deal. This novel is the last ride of the Raven. As awesome as DEMONSTORM was (and I freaking loved it), I felt like some things were kind of left floating. RAVENSOUL gives the reader a massive sense of “This is totally the end.”

This novel picks up a while after the finale of DEMONSTORM. Sol, once the Unknown Warrior, is now the ruler of Balaia, and Denser is Lord of the Mount. The rebuilding of the world is coming along nicely…and the the dead start returning. This includes those of the Raven who died in previous novels. A dimension hopping race known as the Garonin have sealed off the afterlife and are after Balaia’s mana.

Barclay’s strengths have always included characters. No matter which novel of his you read, you can bank on the characters being very easy to like (or hate depending on what he wants you to feel). RAVENSOUL feels a bit like meeting a few of your old friends for dinner. You see how they’ve changed, and how the last few years have molded them into completely different people–for better or worse. The trademark wit and action of the previous Raven novels is here in abundance. The novel feels like the natural progression of the series.

DEMONSTORM is the last novel in the series, but RAVENSOUL is a bonus story full of closure. Why thanks, James Barclay. You have made our day.

I want to point out how well Barclay manages to make the reader feel emotion. Not gonna lie, DEMONSTORM had me shedding more than a few tears. I didn’t think Barclay could outdo that level writing excellence. But man, there is a scene at the end of RAVENSOUL that just thinking about it makes my eyes get watery. It’s one of the most emotionally powerful scenes I’ve ever read.

So this is it for the Raven. I’ll admit that this isn’t my absolute favorite Raven novel. I think DEMONSTORM still holds that position. But this is a close second for me. The Garonin are worthy foes for the Raven and for the Elves. RAVENSOUL is a must read for those of you already reading this series. If you haven’t read Barclay yet, I’m beyond confused. You should have started reading the series the minute you read my review of DAWNTHIEF (EBR Review) from back in the day.