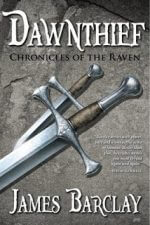 The next time you run across Lou Anders from Pyr SF&F, buy him a drink. In fact, buy him two, he won’t mind. Then, ask him where you can find James Barclay so you can buy that gentleman a drink as well. In Lou’s on-going crusade to bring the US great fantasy titles from the Brits, he brings us James Barclay’s DAWNTHIEF (Amazon), and in doing so takes us on and honest-to-goodness adventure.

Do you remember a few reviews back where we reviewed WINTERBIRTH? (Amazon) Do you remember how upset we were with the comparisons people had been drawing between it and David Gemmell’s work? (Amazon) Well, we are pleased to tell you that Barclay’s DAWNTHIEF is truly worthy of the comparison to the works of the late Gemmell. In fact, we are quite sure Gemmell would be more than proud of Barclay’s work, and the reception it is bound to receive here in the US.

Now, there are a few things to make note of when reading this novel (getting our few nitpicks out of the way early). DAWNTHIEF was originally published back in 1999 in the UK. In the fantasy industry, that was a very long time ago, and the state of the genre has changed. The novel feels very much in the tradition of 90’s Heroic Fantasy based in role-playing games. Also, to our initial dismay, it has elves in it. We don’t exactly like elves in novels anymore… Lastly, there are some rough transitions from scene to scene, likely due to this being Barclay’s first novel.

All right, now that those small things are out of the way, here is the good news (and there is a lot of it). We want you to picture a collaborative dream in which Gemmell and George R.R. Martin worked together. You have the intense, fast-paced, heroic action of Gemmell mixed with the brutal tone that Martin is famous for. Sound awesome? It should, and that is exactly the type of novel Barclay gives us with DAWNTHIEF. It is definitely much more brutal than Gemmell’s novels, but not quite as harsh as Abercrombie’s. Let’s just say the body count is…high. Just how we like it.

Elves. Even the mention of them bothers us. It especially bothers us when authors try to fool us by using elves, but calling them by different names (once again, see our review on WINTERBIRTH). So, call us pleasantly surprised when we realized we enjoyed the elves in Barclay’s novel. What made it good for us? Barclay didn’t force it down our throats. He essentially just said, “Hey, this guy is an elf. Nifty huh?” If he hadn’t told us there elves, we wouldn’t have noticed. It was just a character trait. In DAWNTHIEF, it worked surprisingly well.

DAWNTHIEF was Barclay's first novel with deep worldbuilding and skilled characterization that you may think is generic hack-and-slash fantasy, but you'd be wrong.

The characters are enjoyable, witty, and extremely skilled in the art of killing you dead. The world is surprisingly deep for what many will erroneously consider (but not you right? RIGHT?) a hack-n-slash generic fantasy. To us, it was obvious that Barclay extensively built the back-story of his world. There are few times where he “tells” rather than “shows,” but we get a good sense of a world deceptively rich in history and detail.

Remember, this is Barclay’s first novel. He has published eight other novels since (and 2 novellas). With a first novel that holds so much promise, DAWNTHIEF has made us quite excited to read further in the series. Barclay himself said his books got better and better with each novel under his belt.

DAWNTHIEF was supposed to be released next month (September), but is apparently on sale early on Amazon.com. Go grab yourself a copy of Barclay’s first novel, and pre-order NOONSHADE (Amazon) which will be released in October (though more than likely it will be available in late September judging by Amazon’s track record with releasing Pyr novels early).

Judging from Barclay’s website, he seems like a pretty awesome guy. Go by and say “hi,” and thank him for one of the best action novels released in the US in a long time. And tell him we sent you.

And yes, we were serious when we said go buy Lou Anders a drink. Just don’t get him too drunk, we need him to keep working so we (and you too) have good books to read. Go thank him. Now.