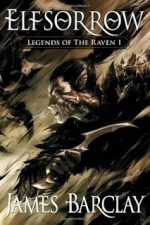 There is something oddly comforting about reading a James Barclay novel. It’s like when the holidays roll around and the smells of good, home-cooked meals automatically make you relax and enjoy the day a tad more than usual. ELFSORROW (Amazon) fits this role perfectly.

The novel starts with a very tense scene depicting the chaos Balaia is in. We are seeing the after-effects of the events from Barclay’s first trilogy, and things are dire indeed. The Colleges of Magic are at war, and it seems like the whole continent’s population has been made into a contingent of refugees. And that’s just the tip of the metaphorical iceberg. A plague, called Elfsorrow, is decimating the elves following the desecration of one of their temples. The Black Wings are leading a crusade of sorts against all magic. Crazy, crazy stuff.

The first thing we want to mention is that you probably shouldn’t start with this novel. This is our opinion of course, and we realize every reader is different, but still. Every character in ELFSORROW has motivations that directly link back to the the Chronicles of the Raven trilogy, so without those books as a foundation you will be lost, and your enjoyment will suffer. So if you haven’t read that trilogy, we suggest you get on that ASAP starting with DAWNTHIEF (EBR Review).

Next, we want to assure all you readers that the pacing of this novel flows effortlessly. From actions scenes to general exposition to conversations…man, it is done sooooo well. None of Barclay’s novels are exactly short, but you easily get swept away and soon find that you are creeping up on the end of the novel.

But really Barclay’s Raven novels are about character. Say what you want about the RPG flavor of his first two novels, or about the inclusion of traditional creatures from fantasy–we mean elves here. None of that matters when Barclay writes. In ELFSORROW, the PoVs switch frequently and every character is very distinct and fantastic. The characters you hate are fascinating to read because you can see their motivations. the characters you love are put in situations where you fear for them (you know, since Barclay will actually kill of main characters). The banter between characters was familiar and perfect, yet beneath the surface of it we could see the strain these characters are living with.

A large chunk of the novel is set on the continent of Calaius, the home of the elven race. Barclay does a terrific job of illustrating the differences between Calaius and Balaia. Such effort is put into showing how this new continent really feels alien to the characters of the story. Very well done. We always like when authors show off new portions of their world. The elves in this novel were actually great. Barclay has improbably rescued them from the depths of the cliché to make them cool again.

ELFSORROW, like any book, isn’t perfect. Our main complaint about the novel deals with the Elfsorrow plague. There is a section midway through the novel (and leading into the last third of it) where everything seems to slow down. There is a lot of travel involved, and Barclay is very specific that it is taking weeks to get to places. The Elfsorrow plague is essentially lethal over the course of a few days. What happens is this sense of urgency seems to get forgotten for this small portion of the novel. Elves are dying, but we don’t really get a sense of the danger and grief involved in it. Fortunately, things get back on track quickly. It’s a fairly minor problem, and we doubt it will bother many readers.

ELFSORROW isn't just a romp through the countryside anymore--deeper issues are involved and explored. You must read James Barclay.

The ending of ELFSORROW is crazy. It is actually very focused and personal even though the result of it is epic. It punched us in the gut. Twice. Then it picted us up and gave us a hug. Not many people, in our opinions, can write tragedy as well as Barclay. He can put just the right amount of sadness and hope into the story. You thought the ending of NIGHTCHILD was grim and heart-wrenching? ELFSORROW is more-so. We almost wept. No joke.

Somehow Barclay’s novels get better and better. All of you UK readers already know this–yeah we are jealous. These novels aren’t just romps through the countryside anymore. There are deeper issues involved and explored. Simply put, you need to be reading James Barclay. He is on our list of “We’ll read anything by this author and probably be impressed while simultaneously jealous of his skills. We love him long time.”