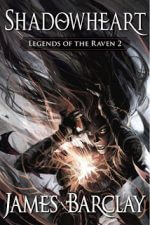 We get asked all the time who our favorite authors are. Two years ago the answers would have been absurdly simple, but we read a lot more novels these days. A WHOLE lot more. As a result, who we consider our favorites tends to shift and slide. Barely more than a year ago we hadn’t yet read anything by James Barclay. Now with each novel of his that we read, he solidifies himself as one of our favorite authors.

The Legends of the Raven series, though it contains many of the same characters from the Chronicles of the Raven, is extremely different from the mentioned trilogy. The emotions of the characters are more raw. Conflicts are closer to the surface. It is with SHADOWHEART (Amazon) that we truly are able to see how good of an author Barclay is. Our UK readers already know all of this, but his novels are completely new to us here in the US, and we are lucky to be getting them all in quick succession. The previous novels are still fresh in our minds, which makes it easy for us to look over our shoulders and say, “Man, those first three Raven novels were great, but they don’t have ANYTHING on the latest few.”

SHADOWHEART picks up right where ELFSORROW left off. It’s hard for us to say a lot about SHADOWHEART without spoiling the ending of ELFSORROW, so we’ll just say that The Raven are dealing with tragedy. Like we said before, the emotions of the characters are exposed for all to see. Perhaps our own emotions as readers were right there as well having just read ELFSORROW. We felt for the The Raven. The mark of any good writer is his or her ability to make the reader feel the emotions of the created characters. In this Barclay–to us at least–has succeeded on a level very few authors have achieved.

The war that threatened in ELFSORROW is in full swing in SHADOWHEART. The Colleges of Magic are in direct and bloody conflict. Some want balance, some want to reset the balance, and other factions–the Wesmen–want magic gone entirely. Xetesk is regaining control over dimensional magic, and have no qualms about using it against anyone who attempts to disrupt their plans. Also all the colleges have discovered the Erienne has inherited the One magic. As usual, The Raven are out to preserve Balaia at all costs.

SHADOWHEART is a full, full novel. Barclay does a fantastic job of showing how betrayed The Raven feel throughout everything. No matter what they do, or how many they save, they are still hunted for the power they hold and represent.

The Raven as we know them are coming to an end. SHADOWHEART has an underlying sense of inevitability throughout. The Raven have lost people in the past, and it is clear that they will lose people in the near future. Every novel the mercenaries get a little more beat up. A little more worn down. This novel was no exception. It’s a bit like walking the plank blindfolded; at some point the fall is going to come.

SHADOWHEART, like every Raven novel that precedes it, is a must-read for those who love action and character-driven novels.

A few very minor problems? Erienne’s complete 180 somehow seems sudden. She goes from hatred towards the people she blames for the death of her daughter to complete reliance. It can feel a little disingenuous. It’s the lack of her previous mistrust that stands out. Also, there are times when the size of armies gets a bit muddled. Like we said, minor problems, and and none of them should affect the overall enjoyment of an amazing novel.

It’s worth repeating that these novels get better with each offering. Barclay’s skill in foreshadowing is impeccable. His large-scale battles in this series better done than in the Chronicles trilogy. His character dialogue, and interaction is better. The up-close action is brutal and fierce. Emotions are honest and raw. SHADOWHEART, like every Raven novel that precedes it, is a must-read. If you want to write action and character driven novels, you should be devouring everything Barclay writes. Twice.