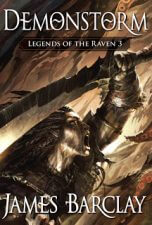 How do you end a series? We’re sure this is a question every author asks at some point during a career. We’ve read quite a few series from start to finish, and have decided that writing that satisfying ending and conclusion must be the hardest thing to do. Why? We chalk it up to expectations. This can be crippling to the final book in a series, especially when the series has been SO good.

You all know what fans we are of James Barclay‘s work. From the moment we opened DAWNTHIEF, we were hooked. He improved as a writer and storyteller from novel to novel, and the stories got progressively more awesome. Simply put, he’s one of our favorite authors. Period. DEMONSTORM (Amazon) marks the “end” of the Raven. We realize that there is still another novel, but keep in mind that RAVENSOUL is more of a bonus tale. DEMONSTORM is the true end. With as much as we enjoy Barclay’s work, we were worried that the final novel wouldn’t live up to our unfairly high expectations.

OK, we’ve led you on enough. Plus you probably already read the tag we attached to this review which reads “Books We Love”. It really is as simple as that. We loved this book. We loved it more than any of the previous Raven novels.

What made DEMONSTORM so satisfying and awesome? The same thing that captured us from the very beginning of DAWNTHIEF: the characters. The truth of the matter is that a series cannot survive the test of time and the readers’ patience if the characters don’t grab you. Through the Raven novels we have become ridiculously attached to the characters of the world. We have been through so much with them that we identify with them. This novel is really the Raven’s last ride, and the immediacy of that statement is felt right from the beginning of the novel.

Balaia is screwed. Yeah, that’s the short version of the whole novel. Xetesk, in their greed and arrogance, opened a rift between the world of Balaia and the Demon dimension making that whole dragon problem from NOONSHADE seem like Hello Kitty’s Island Adventure. Demons flood Balaia and essentially enslave everyone. It’s a grim beginning to a grim tale. There isn’t a lot of humor in this novel because there isn’t room for it. Throughout it all, the Raven have but themselves into exile. They are hunted by humans. Coveted by demons. They feel betrayed by the world they have saved over and over again.

What made DEMONSTORM so satisfying and awesome? The same thing that captured us from the very beginning of DAWNTHIEF: the characters.

And yet they go back to save it again. It’s who they are.

In most novels, the final third of the book is the climax. In DEMONSTORM, the entire novel is the climax. It is one, big moving war. And in war, there are casualties. Barclay has never been shy about killing off characters. This book is no different. The carnage in DEMONSTORM is steep. The cost of fighting these demons is shocking. Our biggest worry, honestly, was that Barclay would take the easy way out. Cheat. Just so you know, he didn’t. We cried.

It is our duty to tell you of any shortcomings. The only ones of note were the sudden time jump early in the novel–it just kinda happened with no real warning. A bit confusing. The only other bit was during the final confrontation. We wish it had been a bit more from Erienne’s PoV. Personally we feel it would have made the already insanely awesome ending absolutely perfect. But that’s just an opinion, and none of this is actually harmful to the immense enjoyment of the novel.

Us readers here in the US have been spoiled. Look how quickly we have been getting Barclay’s novels. A decade’s worth of material has been brought to us in two years. We aren’t quite sure what else we can tell you other than, “Go get his books NOW!”

DEMONSTORM is an emotional and thrilling ending to the Raven. It will make you laugh a little, and maybe even cry a lot. It is Barclay’s best Raven novel by far, and one of our favorite books of the year.