Review: This Is How You Lose the Time War 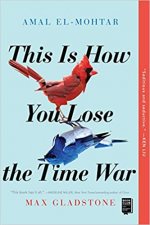 I think if you looked at the Venn Diagram of books that we here at Elitist Reviews are likely to enjoy, THIS IS HOW YOU LOSE THE TIME WAR falls smack dab in the “Very Likely” section. We’ve enjoyed both El Mohtar’s (EBR Search) and Gladstone’s (EBR Archive) work previously, and I’ve developed a real love of the novella (as witnessed here or here). And THEN you tell me it’s epistolary? With time travel? And a queer love story? Sign me up.

The plot of THIS IS HOW YOU LOSE THE TIME WAR is simple, or at least it appears to be. Two agents, Red and Blue, work on opposite sides of the titular war to influence the countless, splintering histories of this world and many others. Their mission is to change those histories in ways that favor their respective sides of the war–Garden for Blue and Agency for Red. Garden and Agency determine their objectives and their methods; the organic, deadly approach of Garden is as equally perilous as the technological hierarchy of Agency.

The reader is introduced to a weary Red, tired in the aftermath of a crucial battle which she has shaped, as she has so many others before. But this time is different. Blue reaches out, leaving a letter for Red on the battlefield. Perhaps she writes to gloat, or perhaps the letter is a trap. Against her better judgment, Red responds.

Red and Blue strike up a tentative, inventive correspondence, hiding their letters in water and songs and the dregs of tea leaves. As their exchange continues, the absolute alienness of each other’s way of life is confirmed. Instead of being an obstacle, their differences fascinate the other, and their shared competency and curiosity draw them together.

Over the years (centuries? millennia?) of their exchanges, it becomes clear that what began as a challenge and a chance has turned into longing and then love. Real, deep, life-altering love. But Red and Blue are still working for their respective employers, and when Blue makes a move that puts Garden at a real advantage, Agency suspect that Red, one of their best agents, is the perfect person to take her down. Watching the aftermath of Red and Blue’s choices in the moment is rewarding and exciting in equal measure.

A tale that develops into a resonant piece about desire, belonging, and love. It’s a story that reads beautifully and will linger with you.

At first I was drawn in by the fascinating glimpses of worlds that Red and Blue visit on their escapades, the roles they inhabit as time agents, and the clever means by which they convey letters to each other. I could see (I thought) where the novella was heading, but somehow El Mohtar and Gladstone have crafted a tale with the excitement and danger of time traveling agents that’s also sweet and beautiful and romantic.

THIS IS HOW YOU LOSE THE TIME WAR is a seemingly simple tale about an exchange of letters between sworn enemies that develops into a resonant piece about desire, belonging, and love. It’s a story that reads beautifully and will linger with you.