Review: The Hunter from the Woods 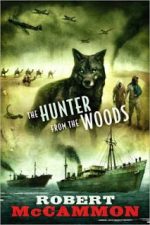 When I first read Robert McCammon’s THE WOLF’S HOUR (EBR Review), I was blown away. It was a Horror novel mixed with a Spy Thriller, and all I wanted was to read more about McCammon’s signature character, Michael Gallatin. In THE WOLF’S HOUR, we learned about his mission into Germany during the height of WWII, while at the same time learning how Gallatin became a werewolf. It was all fascinating stuff, but I knew there had to be more. It wasn’t unlike reading THE BOURNE IDENTITY (Amazon) and knowing that there were countless stories untold.

Imagine my delight when Subterranean Press announced that they would be releasing a collection of short fiction from Robert McCammon featuring Michael Gallatin. Titled THE HUNTER FROM THE WOODS (Amazon), the collection contained six short stories and novellas covering Gallatin’s time before and after the events of THE WOLF’S HOUR.

The first story, “The Great White Way”, is extremely short and probably the weakest of all the stories. It feels a bit like a deleted scene from THE WOLF’S HOUR. It involves a young, pre-spy Gallatin who has taken refuge with a gypsy circus. It’s not that the story is bad in any way, it just doesn’t hold up to the other stories at all. What it does having going for it is the reintroduction of the character, and filling in a bit of his history.

“The Man from London” is very similar to the first story in feeling like a piece of THE WOLF’S HOUR that was cut. It has to do with how Gallatin was recruited while he was living outside of a small Russian village while providing them with the food they needed in return for anonymity. It is very cool to see how he was recruited, but I was left feeling the whole bit could have been expanded a bit more. That said, I enjoyed it a lot. Again, filling in Gallatin’s history is the main point of the story, and it succeeds in that sense.

Things really start picking up with “Sea Chase”. For Gallatin, this is a character builder story with Gallatin watching over a Nazi weapons designer who is seeking to defect. The writing here is true McCammon. A lot of internalization from Gallatin as we get to know the various personalities on a fishing boat and the ensuing chase at sea. We see how good a person Gallatin is, and why he becomes the man we see in THE WOLF’S HOUR. Love it.

“The Wolf and the Eagle” was easily my favorite story of the collection. It involves Gallatin and a Nazi fighter pilot in the desert. I’ve often told people how much I love McCammon’s characterization. This story is a showcase of McCammon’s ability to take a character that other authors would automatically make a cliched villain, and turn him into a fascinating study. I would have loved for this to have been expanded even more, but it works extremely well as it is right now. New authors take note: this is how you write a sympathetic antagonist.

THE WOLF'S HOUR is one of my favorite werewolf novels of all time, and THE HUNTER FROM THE WOODS is a terrific companion collection to the classic.

“The Room at the Bottom of the Stairs” feels like a natural extension of THE WOLF’S HOUR. Honestly, it feels like the seed of a follow-up idea for a full-on sequel to THE WOLF’S HOUR. Gallatin is to go to Germany as kill a female spy. This was such a great story that would have served as an amazing beginning to an actual sequel novel. What struck me about this novel in the same way certain scenes in McCammon’s classic SWAN SONG did was how vivid certain scenes are. You can just imagine them painted on canvas.

“Death of a Hunter”… this story answered the one question I had after finishing THE WOLF’S HOUR. I won’t spoil it in any way, because it’s great. This story serves as a wrap up to Michael Gallatin. He’s older. More tired. He spends his time warming himself at the hearth of his home. Which is when his past catches up with him. The interesting part about the story (apart from the twist at the end) is where Gallatin reflects on all of his missions from his younger days. A majority of them are things that weren’t in any novel, and it made me want to read about them soooooo bad. This story serves as a good send-off for the character, and ends the collection well.

As a parting observation, I “read” this collection like it THE WOLF’S HOUR, via GraphicAudio. They do an incredible job with the novels they adapt.