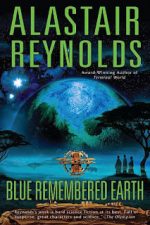 I was a little late to get on board with Alastair Reynolds. I only picked up a book of his two or so years ago, but once I found him he quickly became one of my favorite authors. He writes the type of book I love: big, grand space operas with vast ideas that can take place over thousands of years and span across galaxies.

Recently I’ve tried to get my dad to try Reynold’s books out. He kept asking me which book of his to start with. I honestly didn’t have an answer. It seemed like everything he had written (that I had read) had some great stuff in it. I enjoyed all of his books.

Sadly after reading BLUE REMEMBERED EARTH (Amazon), I can tell him which book not to start with.

While BLUE REMEMBERED EARTH had some great moments and certainly showed that this series can become something really cool and special, this book sadly wasn’t up to the usual standards that I hold Reynolds too. Which isn’t to say it’s not a good book. It really is. It’s a lot of fun and would be a great book by some authors. But it’s not Reynolds best in my opinion.

Here’s the blurb from Amazon: One hundred and fifty years from now, Africa has become the world’s dominant technological and economic power. Crime, war, disease and poverty have been eliminated. The Moon and Mars are settled, and colonies stretch all the way out to the edge of the solar system. And Ocular, the largest scientific instrument in history, is about to make an epochal discovery…

While BLUE REMEMBERED EARTH had great moments and showed the series potential, this book sadly wasn’t up to Reynolds' usual standards.

Like I said earlier, the book is fun, and I really did have a good time reading it. It just didn’t hold up after the fact. You know what I mean? There are those books that you read and read and enjoy, but then after you’ve put it down, it kind of wanders out of your head. You don’t think about it much, it doesn’t leave a big impression on you. This is one of those books. It just didn’t stay. And even now looking back on it, I can see some really fun scenes and some big ideas, but that’s all it is, fun scenes. Not great characters for me, not a compelling story, just moments.

The weird thing about BLUE REMEMBERED EARTH is the end of it really did leave me wanting to read the next one. The book, in and of itself, didn’t blow me away but DID manage to set me up to where I’m anxious about reading the next in the series. With most authors I would be wary. I naturally ask myself, “Sure he set me up for some cool things to happen, but is he going to come through on those ideas?” Or, “Is the next book going to wow me where this one only showed the potential of wowing me?” I’ve read enough of Reynolds’ work to believe that this book was just the slow set up to something big and amazing to come. I could look back on this book as the beginning of a great epic story.

Like I said, with someone of Reynolds caliber, I’m willing to give him the benefit of the doubt. For now, BLUE REMEMBERED EARTH falls right on the line of “Mediocre” and “Like”, but good follow-ups could make this the start of a fantastic series.