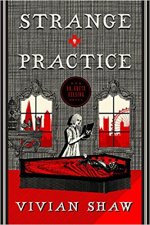 With Halloween just around the corner, STRANGE PRACTICE by Vivian Shaw (Amazon) seemed like just the novel to review–with a plot full of vampires, ghouls, and creepy cultists, it’s a fun (and seasonally appropriate) read.

Like many doctors, Greta Helsing (her family having quietly dropped the ‘van’) works hard to keep her solo medical practice afloat. However, as one of the only doctors in England who caters to the supernatural community, Greta deals with an additional set of stressors including anything from keeping her patients’ identities safe to hand-carving new bones for disintegrating mummies.

When Greta’s good friend (and vampire) Lord Ruthven calls with an account of a mysterious assault, Greta’s life only gets more complicated. The victim is Sir Francis Varney (also a vampire) who was assaulted by a group of men dressed like monks. Their weapon of choice was a strangely shaped dagger smeared with poison that appears designed to target a wide-spectrum of supernatural beings.

Greta and Ruthven link Varney’s injuries to a recent spate of mysterious killings across London. A little research and a near-miss encounter for Greta reveals that the culprits are a vicious cult of monks who have gained superhuman abilities (as evidenced by their unnaturally glowing blue eyes). The monks have been using London’s vast underground network of tunnels and sewers to move about undetected and the pace of their attacks appears to be quickening. Greta worries about the uniquely vulnerable supernatural population that she cares for and resolves to stop the monks, even as she tries to keep herself and her patients safe.

Calling up friends and calling in favors, Greta and Ruthven rush to get to the bottom of this new threat before any more killings occur.

With a plot full of vampires, ghouls, and creepy cultists, STRANGE PRACTICE is a fun read that gains steam as Shaw details her supernatural world.

STRANGE PRACTICE benefits from Shaw’s revelations and good pacing throughout, which make the threat to Greta and her friends feel increasingly heightened as the narrative progresses, even if the stakes are a little fuzzy (why are the monks attacking both humans and the undead? Do they have some sort of overarching plan other than random assaults? aren’t there only ten of them?). These hazy stakes combined with a fairly small group of evil-doers meant that I was never particularly worried that our protagonists would fail at their chosen task–but it was still fun to see them carry it out.

Greta is the real heart of the novel. She’s dedicated to her practice and fiercely determined to do right by her patients. Unfortunately, Shaw doesn’t share a glimpse of who Greta is when she’s not being a doctor–what she enjoys or cares about or fears. Her memories of her father fill out some of these gaps, but more fully exploring this connection would really have rounded out her character and provided her a more resonant emotional core. I think some of this was just mis-timing when the the novel started. By moving the events of the novel closer to the death of Greta’s father, I think Shaw could have given Greta a greater sense of emotional vulnerability and painted a fuller character.

STRANGE PRACTICE gains steam as it goes, with the narrative and characters becoming stronger and more interesting. Some of this increasing strength is the natural time it takes to build an ensemble cast and have them work together as a team. Shaw also seems to loosen up as the narrative moves along and sinks more fully into her world, exposing the deeper, more complicated world building that was only hinted at the beginning. I enjoyed STRANGE PRACTICE and suspect the second book will be even better.