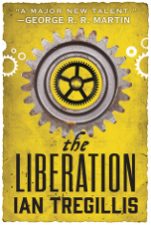 Endings are always tough when it comes to book series. For readers, for authors, and quite usually for the characters as well. They’re the showdown, the climax of everything written thus far, the point where we as readers have to say goodbye. For many, the ending is the part of the book, or series, that will determine whether you like or hate it, despite everything that has led you as a reader to the point. I’m more in the camp of “joy in the journey” than “how-does-it-end”. So, a great read that has a decent ending gets higher marks than a ho-hum read with a brilliant ending. It’s really nice though when I don’t have to make that distinction; when I get to read something that was a great series, had a great last book, and a great ending.

THE LIBERATION (Amazon) is the third and final novel in The Alchemy Wars, an alternate-historical fantasy series about how the world might have been had the Dutch invented alchemally-controlled mechanical men to serve as their slaves and soldiers alike, sometime back in the 1600’s. It’s been one of my favorite series to read these past few years, and this book both continued the goodness of the previous two and put a nice cap on the series as well.

Warning, I’ve tried to minimize spoilers to the previous novels here, but it’s a highly difficult chore to do at this stage of the game, and so I doubt I’ve been perfect. Regardless, this is quite definitively a series of books that delights and entertains as it develops such that what information I do give here just might not spoil the experience as such. Still, reader beware.

There are three main characters this time (um. Just like last time — sheesh the consistency of this guy. Did anyone else notice that all three of these novels are over 400 pages each AND they’re all within a dozen pages of each other? Whoa.), all of them familiar.

Daniel, ne Jax, the mechanical man unexpectedly given free will around whom the entire trilogy has turned, is trying to find his way in the ruins of Marseilles-in-the-West amongst the throng of mechanical men newly freed from all their previously-binding geasa. He’s not particularly happy about it. Every which way he turns there is another grouping of mechanicals wanting to know what he thinks they should do. They don’t know what to do with themselves, and who better to lead them than the one who set them free?

Berenice Charlotte de Mornay-Périgord, the ex-Talleyrand of New France, and unwilling accomplice in the release of the Dutch army of mechanical men, is now serving the exiled King of France as he’s trying to form an alliance with these freed mechanicals, and they’re not having much luck, when a missive arrives with a single word, which is most certainly meant for her, to remind them of a still unanswered question: What is this Quintessence, which is so vitally important to the creation of all mechanical men?

Anastasia Bell, Tuinier (lead clock maker) of the Dutch, is a new point-of-view character and one that I was someone surprised to see. You see, she wasn’t exactly the most… sympathetic of characters from the previous book, and I was curious to see what she would bring to the story. After returning to the Central Provinces for some much needed time to heal, a “plague ship” arrives at port, and with it come a slew of mechanical men bent on killing humans and spreading “disease” amongst the mechanical servants of the empire. She doesn’t know what it means or how it is happening, but it scares her to death.

I remember reading the previous novels and feeling like they took a decent amount of time for me to get through, but this one seriously just flew by. I had its pages open every waking minute that I wasn’t at work in my chair, driving a moving vehicle, or in the shower. Seriously, I couldn’t get enough. One of the major themes that our reviews of his previous trilogy, THE MILKWEED TRIPTYCH (EBR Review for Book 1, EBR Review for Book 2, EBR Review for Book 3) pointed out was consequences, and this book just hammers on that point. The consequences of the Dutch relying so completely upon their metal servants. The consequences of Berenice breaking the secret of imposing the controlling geasa upon the Clakkers. The consequences of betrayal in matters political and personal. It seemed as if every action of every character were called before a tribunal and found to be guilty of the most heinous of crimes, despite the fact that in the heat-of-the-moment every decision seemed justified, and even morally imperative. Only later, in this book, we find out just what those actions were causing, as everything is revealed to us in greater detail. Love it. Love it. Love it.

I was increasingly impressed, as the novel raced toward a close, just how focused and cohesive the entire series was. Every detail viewed, every rumor heard, every twist of the plot experienced as these characters rolled across the familiar-and-yet-not alternative world of Tregillis’s imagination, comes to be of great importance to the winding-up scene. One of the habits I most like to see in story-telling is that of returning to the beginning of things, and our winding-up scene follows this most well as everything comes to a head back at the forge where it all began: in the heart of the Central Provinces where the mechanical rogue, Adam, was sacrificed to the Great forge whilst a geas-driven Jax struggled to watch on. There is a sense of completion, and yet also of future potential, to the ending of this book and series that made it absolutely brilliant.

All readers of fantasy need to read more Ian Tregillis. As far a alternate historical fantasy is concerned, I’m not exactly what one would call an aficionado, but I thought the setting wonderfully-done. There is depth and history such that it enriches the experience and yet doesn’t get in the way of the story. Intelligently written, geniously plotted, and expertly executed, THE LIBERATION exceeds in every way that matters to me and is a great conclusion to a great series. I can’t recommend it enough.