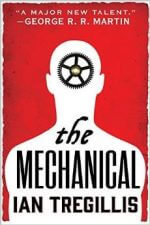 Ian Tregillis is a name that has been on the watch-list of EBR for quite some time now. The Milkweed Triptych was an amazing and impressive ride, especially for having been his first published works. Pretty much solidified his place in our hearts. And so when I saw the arc for this book in my most recent box of goodness, I pretty much wanted to sit down and ignore everyone and everything else for the next several days. Didn’t quite work out that way, but I did end up putting in a couple extra hours each day toward reading it because, honestly, I just couldn’t put the dang thing down. Seriously good stuff.

THE MECHANICAL (Amazon) is the first of The Alchemy Wars, a new series from Orbit, which is where Mr. Tregillis landed after his time with Tor ended. I found it somewhat humorous and more than a bit auspicious that he’s now with Orbit, after so many of my other favorite authors have found their way there as well. Someone is doing things right at that place, people. Watch them.

The Dutch have become the major superpower in the world with the advent of the mechanicals, or clakkers, invented by the Dutch scientist and clockmaker, Christiaan Huygens. Several centuries and numerous wars with the French later, a tenuous ceasefire has been declared between the two countries, leaving the North American continent a war-torn mess, but the set-pieces of the game with all of the same intentions and designs.

The story is told from the perspectives of three different characters. The first, and most important to the story, is Jax the clakker, servant to prominent Dutch family, the Schoonraads, who have just been handed the job of re-establishing stability to the Dutch bank in the Americas and will soon be leaving to journey there. Pastor Luuk Visser is a French-Catholic man of the cloth that has spent quite some time secretly infiltrating the Protestant church in the Netherlands with hopes of sending important information back to France and its master of spies… who just happens to be the third of our POV characters: Berenice Charlotte de Mornay-Périgord, also affectionately known by the ubiquitous and centuries-spanning title of Talleyrand, and is responsible for collecting information for the French crown.

The first thing one notices is that Tregillis’s writing is intelligent, fluid, and yet also quite dense. The only slight hang up I had with it was the introduction of so many Old Dutch terms, spellings, and pronunciations, though these difficulties with the text quickly faded. The second thing you find is that there is a perfect balance of explanation and characterization. Everything is seen through the eyes of one of our three POV characters, and each of them understands the world and its intricacies in a different way. There is history to be found, yes, but it doesn’t slow down the pacing of the story. There are no long expositions on the alternate history of the world and how we got the place where the story starts. It just starts, and that is the third aspect about the story that you’ll immediately notice: just how quickly the story gets moving.

Jax views the execution of a rogue clakker, Adam, that has somehow slipped out of the restrictive construct of the driving geas that directs all clakkers in their actions. We see intimately just how overwhelmingly this geas impresses itself upon Jax and his choices. The concepts of free will and loyalty to the clockmakers play a very prominent and important part of his story, and they are both evident from the very beginning.

Visser is planning on killing a French spy that has been captured by the Dutch before the spy can give away Visser’s identity. These actions will put both him and his position within the Protestant church in danger, but if he doesn’t act quickly he’s likely to be damned as well. But it doesn’t go as simply as that for him.

THE MECHANICAL tells the story of Jax, an automoton with a soul. Such a great beginning that will no doubt end as another masterpiece of story-telling.

Berenice has found a trapped clakker soldier, and hopes to find a way to dissect it and learn how to change the geas of the clakker to support the French and hate the Dutch. Doing so would seriously impact the ceasefire and likely begin the war all over again, but she is driven to see these actions through regardless of the possible consequences. And consequences there are, though not of the type she anticipates.

This book grabbed me from the very beginning and didn’t let go the entire time. Even at nearly 450 pages I didn’t want the book to end. I could have easily read again as much and still loved every minute of it. The turns that the story took and the conflicts it tackled were brilliantly executed. It was fun and engaging and made me forget, so often, that I was reading a story, and left me instead to live it.

This is another one to open the coffers for, people. Such a great book, and such a great beginning that will no doubt end as another masterpiece of story-telling.