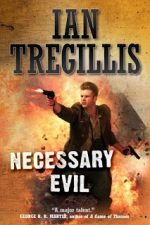 One of my biggest disappointments when the 2013 Hugo Award nominations were announced was the absence of Ian Tregillis’ THE COLDEST WAR (EBR Review) from the ballot. Don’t get me wrong, I was absolutely thrilled that EBR was nominated, but not seeing Tregillis’ name on the list for Best Novel was a huge bummer. His Milkweed Triptych is one of the most enjoyable and clever series on the market right now, and a Hugo Nomination would have made a huge and well-deserved impact on his exposure. Why am I bringing this up? Not out of bitterness, I assure you. I want all you readers to understand just how much I and everyone at EBR loved THE COLDEST WAR.

NECESSARY EVIL (Amazon) absolutely crushes its predecessor. It is better in every way, and stands as one of the best novels I’ve read since founding Elitist Book Reviews. It will be on my Hugo ballot for 2014, and it should be on your ballot as well.

Now it’s time to get detailed, but I have to start with a warning. From this point on there will be spoilers of the prior two novels, BITTER SEEDS and THE COLDEST WAR. I hate including spoilers, but in order for me to point at what makes NECESSARY EVIL so awesome, I need to talk about the prior novels. If you haven’t read the prior two novels you should follow these instructions:

1) In a separate window, open Amazon.com.
2) Add BITTER SEEDS (Amazon), THE COLDEST WAR (Amazon) and NECESSARY EVIL (Amazon) to your cart.
3) Buy the books.
4) Bookmark this page, and return after you have read the series. Close this page without reading further.

Upon return:
5) WELCOME BACK!!! Awesome right? Now, tell all your friends how incredible Ian Tregillis is.
6) Reread the series. Because why not?

So, THE COLDEST WAR ends with the Eidolons destroying everything. They hate humans, and Raybould Marsh gave them the key they needed to enter the world and end all human existence. Well, at least in THAT timeline. Marsh has been sent back in time to create an alternate timeline where the Eidolons don’t break through.

To me the brutal failure of the main characters, and how they caused their own destruction, is what made THE COLDEST WAR such an impressive novel.But with that success came a whole lot of worries. How could Tregillis possibly up the proverbial ante?

NECESSARY EVIL starts with Gretel. We never got to be in her head. We never got to see her machinations from her own PoV. In this book we see how she tampers and manipulates. We really are shown just how obsessed she is with Marsh, and how not even her brother truly matters in this grand scheme she has. Her whole goal is to create a timeline where she doesn’t die. It’s a simple goal, yet completely believable. So often the goals of literary villains have no substance behind them. Not so here. Gretel’s maniacal obsession with making sure she lives is written perfectly.

Following this stunning introduction to the novel, we get one of two versions of Raybould Marsh. We get our Marsh–the one from the destroyed timeline–sent back in time to 12 May, 1940 when everything originally went insane. It is here that Tregillis does some clever writing. This Marsh is told using a First Person PoV. The other Marsh–the young one in this new timeline–is told in Third Person Limited. Wondering which Marsh we are seeing is never an issue for the reader. What is more, we see the major contrast between the two Marshes and just how different they actually are.

All the other characters are back. Klaus. Will. Liv. All the other German super-humans. All the other Milkweed participants and warlocks. My only slight let-down came in terms of Klaus. He was my favorite character by the end of THE COLDEST WAR, so to see him so sparingly used in this novel made me a little sad. He got his ending in THE COLDEST WAR (and it was perfect), but still. He felt like a bit of an afterthought here.

Remember all those times that Will and Marsh saw that old, scarred guy? We finally got the obvious payoff in NECESSARY EVIL. Having read a lot of novels in my day, I appreciate how well Tregillis set all this up within the first novel.

Now, I can’t get into the details of this specific novel. Let’s just say that it is brutal, and the novel is aptly titled. Both Marshes and Will have to do some pretty horrible things to try and set the timeline right. You’d think that it would be hard to shock the readers with atrocities committed by these main characters, but Tregillis pulls it off masterfully.

NECESSARY EVIL is the perfect conclusion to what is now one of my favorite series ever. Alternate History that will make everyone absolutely love it.

The ending to NECESSARY EVIL is not totally happy. It can’t be. If this series has touted one philosophy, it is that every action has consequences. I’ll admit that at first I was bit shocked by how Tregillis wrapped it all up. But the more I thought about it–and I’m still thinking about it–the more I LOVED it.

NECESSARY EVIL is the perfect conclusion to what is now one of my favorite series ever.