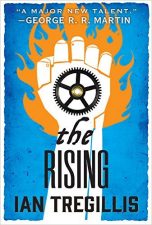 At the time I had no idea how it might be possible, but when I got the email saying that this book was headed my way I was totally taken by surprise. As soon as I got it, I barreled through its pages, loving every minute and was completely impressed when I got to the end. Then, as I sat down to write this review, I casually glanced at the publication date of the first book in this series, THE MECHANICAL, and realized why the follow-up hadn’t even been on my radar: the first book was published in March of this year. Whoa. Then I got to be super impressed because not only had this book really entertained me, but it had been released a paltry nine months after its predecessor.

THE RISING (Amazon) is the second book in The Alchemy Wars by Ian Tregillis, which started out with a bang earlier this year. I absolutely loved that book and was uber excited to read this one. Tregillis writes his characters with intelligence and nuance that I’ve quickly come to anticipate in his writing. His ability to relay information through character is done brilliantly well, pulling you into the story and the vantage of the characters with seeming ease.

This book, like its predecessor, is told from the perspective of three individuals. Two carry over from the previous book: Jax, the freed clakker, and Berenice Charlotte de Mornay-Périgord, the ex-Talleyrand of New France. The third character is a familiar face from before, Hugo Longchamp, now captain of the guard of Marseilles-in-the-west. And although there isn’t any POV time for him, Pastor Luuk Visser is around as well and makes a re-entrance into the story.

Jax is on the run from the Dutch, trying to find the free clakker group far off to the north after narrowly escaping the destruction of the clakker Forge. Berenice, although now bereft of her power as New France’s Talleyrand, is still doing all within her power to bring to pass the destruction of the French through understanding the geas driving their clakkers. Captain Longchamp is frantically trying to prepare for the attack of Marseilles-in-the-west by the Dutch after the destruction of their Forge and the tentative peace that was just waiting for its time to fail.

THE RISING raises the stage upon which the fallout of Jax and Berenice's efforts will be told. Engaging, entertaining, surprising, and well-written.

In some ways, this book was even better than THE MECHANICAL. The development of each of these characters in turn is brilliantly well-done. Especially Longchamp. I really enjoyed his character and how he was built so much by what he did instead of just through relaying his past experiences or through his speech, as is so often the case. From the beginning of the book to the end, I was fascinated by the character and the situations in which he found himself. The conflict that arises between him and Pastor Visser was especially fun. I was waiting for Visser to come back into the fray, and he did so in impressive fashion. Jay’s foray into the north leads him places both in-line with, and contrary to, his understanding. His is a cautionary tale of not always finding truth in what you expect to be true. And Berenice dives deep into another choice opportunity and learns ever more about the clakkers and their geas

In other ways, the book mildly suffers from middle-book syndrome. There is a certain amount of setup that can be seen a ways off between the storylines of Jax and Berenice. And yet there is conflict between the two of them, as Jax is working to understand the geas to ultimately free his brethren of alchemical steel, and Berenice is trying to disrupt the geas and bring the clakkers under French control. This tends to offset the setup a bit, but even more so through the preparation of the coming battle. For all the while, Longchamp’s story builds toward the battle in Marseilles-in-the-west, which ultimately comes to a spectacular head.

Building on the solid foundation laid by THE MECHANICAL, THE RISING raises the stage upon which the final fallout of Jax and Berenice’s efforts will be told. Engaging, entertaining, and surprising, this one is looking to be nothing if not another great story from a great author. An author that is quickly rising to the top of my favorites list.

Can’t wait for the final chapter of The Alchemy Wars.