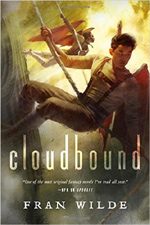 In UPDRAFT, Kirit changed the status quo in her city above the clouds, now in the second book, CLOUDBOUND, it’s up to Nat to help deal with the resultant fallout. For all that’s changed since Kirit became a Singer, there’s still so much more change to come.

If you read UPDRAFT, you have reason to be excited about this next installment where we get so many questions answered. But don’t think you’ll understand what’s going on in CLOUDBOUND if you haven’t–in fact you’ll be completely lost from page one. So go read the first book and then come back for the next installment. You won’t be disappointed.

Where Kirit was our PoV narrator for UPDRAFT; but this time around CLOUDBOUND is told from her best friend Nat’s PoV. Nat is now a member of the Council, the group of people with representatives from each tower who make decisions for the city. And their current decision is to hold a Conclave where the disgraced Singers will be thrown down in punishment. While Nat used to go along with his mentor Doran’s council, he’s beginning to think for himself (courtesy of Kirit’s commentary on the state of things), and wonder at Doran’s motivations. Singers aren’t bad necessarily because they’re Singers, and surely the children in training are innocent. There has to be another way to satisfy the city’s sense of justice.

Nat and Kirit are able to convince Doran to give them time to find the true source of trouble in the city, because they’ve discovered someone is drilling into the heartbone of a tower in order to use the marrow for their inventions and to kill the tower. But everything goes horribly wrong. For, like, the entire book. It’s awesome.

Kirit was a great character in UPDRAFT, but it’s nice to see the city and people from Nat’s PoV. He doesn’t instantly distrust people like Kirit does, and instead tries to see their strengths. He wishes he were better at diplomacy and changing others’ opinions the way Councilor Doran seems to be able to. But if anything, Nat is earnest in his desire to do what’s right for his family, friends, and the city. Unfortunately that means fighting against people who seem to be unbeatable, because he’s barely out of his youth and they have experience and strength of arms on their side.

However, Nat has his own little ‘army’ of friends and family who are willing to help him: Kirit, Kirit’s mother Ezarit, his mother Elna, mother-of-his-child Ceetcee, , former Singer Wik, and even the children Ciel and Moc who had been in training to become Singers, and others. He meets scavengers below the clouds, one in particular, Aliati, helps them explore parts of below the clouds that no one else dares to visit because of the dangers involved.

Kirit changed the status quo in her city above the clouds. In CLOUDBOUND, it's up to Nat to deal with the fallout. But there's still so much change to come.

The best part of this scenario is that we learn so much more about this city, answering questions we were asking in UPDRAFT, such as why do they live in bone towers? Why can’t they live on the ground? Why is the Spire dying? And so many more. As the story progresses, we see more and more of this strange new world, as Nat and friends descend below the clouds they discover ancient plates that describe machines and skills no longer in use, find meadows suspended in air, and learn that singing causes the littlemouths to glow. So much to discover and explore; however, they must do it under duress, for they’re in hiding as the politics above turns into outright war.

As in the first book, CLOUDBOUND moves as a steady pace, mixed with action and scenes of learning and discovery. Occasionally the prose gets terse as Wilde skips to characters movement (however, she’s improved from UPDRAFT), and I got a little lost in the political discussions, but that’s just me (see LARCOUT). But those are minor complaints compared to the utter creativity and imagination of this engaging series. There’s so much to talk about in CLOUDBOUND, but I think you should read it and find out what Wilde has to offer for yourself.