Review: Voyage of the Basilisk 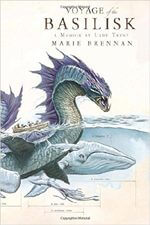 This series keeps getting better and better.

Here we are in book 3 of Marie Brennan’s Lady Trent Memoirs with VOYAGE OF THE BASILISK (Amazon) and our heroine, Isabella Camherst, is sent on an expedition to research dragons on sea and on land. Along for the ride is her young son Jacob; Jacob’s nanny Abigail; and Tom, Isabella’s research partner.

With Isabella on board, they are bound for an adventure.

The voyage starts out as scheduled, they find their first sea dragon, and observe the beast… more close-up than planned. Fortunately everyone survives. As they carry on in their travels and stop at a port town conquered by the Yelang, Isabella discovers that her reputation has preceded her, and that the dragon bone preservation solution stolen in book 2 has resulted in the very thing she feared: governments hunting dragons for their bones. Powerless to recover the stolen solution or protect the dragons, she must move on in her studies. But when they sail for the open sea, a storm throws them off course and the ensuing discoveries forever changes Isabella’s understanding of dragons and herself.

With Isabella on board, the crew included in the VOYAGE OF THE BASILISK are bound for an adventure you will not soon forget. Don't miss this one.

The best part of this series is Isabella. She is a heroine in every sense of the word. Her PoV narration is filled with self discovery, an appreciation for the world around her, and observations about her companions. She meets so many new people along the way, such as the mysterious Suhail, whose passion for Draconic archeology rivals her own for dragon naturalism; Isabella’s son Jacob, now nine, takes a bigger role in the story and it’s fun to see him become his own person while inspiring his mother in the process; the cross-dressing native who understands Isabella’s obsession with dragons and how it flavors her personality; and even the island where they are stranded for several months has its own personality with its proximity to the very answers Isabella is looking for.

The progression of events worked much better for me than in book 2, THE TROPIC OF SERPENTS (EBR review), with information building in such a way that despite the crazy sequence of events in the climax that I believed every word. And the result was a book I loved even more than the first two. Sure it takes nearly half the book for the story to really get going, but that’s the pitfall of a ‘memoir’ style of storytelling. Despite this limitation, Isabella’s narration of events, however mundane, are never boring. There is the usual strange cultures, crazy events, dragon science, and colorful characters–only here this is so much more. I’m not sure how Brennan can do better with IN THE LABYRINTH OF DRAKES (Amazon) due out in April, but I’m super excited to find out.