Review: Child of a Hidden Sea 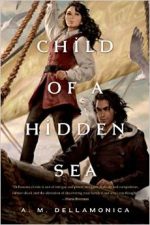 Sophie is determined to find her birth parents. But when she finds her mother, there isn’t the grand reunion she was hoping for. Not ready to give up yet, Sophie happens across her aunt being attacked in a San Francisco alleyway and rushes to intervene.

The next second she finds herself in the middle of an ocean surrounded by glowing moths, along with her aunt, who has been stabbed, with only Sophie to save her.

Sophie does save her aunt, but unknowingly sets off a chain of events that disrupt the lives of the people who surround her.

The place where Sophie finds herself is Stormwrack, a world that is mostly sea, and its nations the islands that litter said sea. But that’s not the only thing that sets it apart from the Earth she knows. Stormwrack has magic.

Sophie’s curiosity about this new world sets her apart from the people of Stormwrack, who don’t seem to wonder about much. She’s a photographer and the unique flora and fauna of this world astonishes her. She’s clever and feisty, and has her own ideas about how things should work. Even if she can’t quite bring herself to defending her thesis and finally getting her degree.

A.M. Dellamonica’s new portal fantasy, CHILD OF A HIDDEN SEA (Amazon), is not groundbreaking, but is has easy-to-read prose and a PoV narrator whose curiosity fuels the forward movement of the story. A couple years ago I reviewed her BLUE MAGIC (EBR Review), which was unique and interesting. In CHILD I particularly enjoyed the relationship between Sophie and her brother Bram.

There's politics, adventure, storms at sea, monsters, and a dysfunctional family Sophie never knew in CHILD OF A HIDDEN SEA.

And that’s about it. It’s kinda fun to read, but nothing really wow. And eventually I got bored because it got repetitive. Here’s where I differ from the Amazon.com reviewers who said it was great world building–it wasn’t. Stormwrack is like Earth, except where it isn’t. The flora and fauna are slightly different. The nations are stereotyped caricatures of different segments of Earth populations: the homophobic religious zealot nation, the semi-legit pirate nation, the matriarchal nation, the promiscuous nation. Really? Is that all she could come up with? Sophie’s adventures take her through these varying cultures, although time constraints mean we don’t see everything. But I can guess what the other nations will be like. Perhaps a nation of scholars, a nation of farmers, a nation of sheepherders, and a nation of athletes. See? I should write the sequel.

And they are policed by a fleet of ships all the nations contribute to. It’s true that the fleet’s city on the water was interesting, and the way they work around moving from ship to ship was clever. But then the story gets bogged down by a bureaucracy that is constrained by laws–except where they can bypass laws according to certain individuals’ reputations or position. Or by dueling. Because of course an alternate Earth with magic can’t use metal, but they can still use swords.

As mentioned, Sophie’s relationship with her brother Bram is a cute part of the story, but then I realized that his genius-boy intelligence feels conveniently like having a computer in a world with no technology or Google. Dellamonica can write interesting characters, such as the half-sister Verena who feels cheated by Sophie’s sudden appearance and Parrish the handsome ship’s captain who must help Sophie find her aunt’s attackers. Unfortunately, by the end the cast got a little unwieldy, and I was losing track of who was who.

Perhaps the most disappointing of all was the magic. Early on we’re teased with inscription, and someone magics Sophie with the ability to learn the language using her name and a seashell. We’re given bits and pieces about how inscription uses the inherent characteristics of an item, along with words, to cast a spell. People can be given abilities such as strength by using their names. But there’s a price. Yet information about how it’s done, who does it, and other limitations aren’t really explained. I was super interested at first, but got frustrated when this part of the world-building didn’t go anywhere.

There’s politics, adventure, storms at sea, monsters, and a dysfunctional family Sophie never knew–and she begins to think that perhaps San Francisco would be a better place to live, after all. At least it would be more realistic.