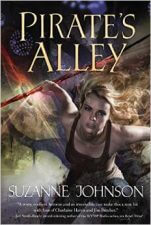 DJ’s life is full of the good and the bad. For example: bad–last month she was bitten by a loup-garou; good–she was kept from changing by elf magic; bad–that meant a blood bond with the most annoying elf in existence; good–she was able to keep her friend Jake from getting in trouble. Bad–at the opening of PIRATE’S ALLEY (Amazon) she’s still injured and homeless as a result of the events in ELYSIAN FIELDS (EBR Review). Good–she’s living at her best friend Eugenie’s place, Alex is still her boyfriend, and she’s been able to avoid Rand for the most part.

But DJ knows that any of that can change in a heartbeat. Like when she discovers that Eugenie is pregnant with Rand’s child. But it turns out that’s not all she has to worry about.

Here we are in book four, and the momentum does not slow down. The story starts straight out of the gate and if you aren’t familiar with the series, starting here will be disorienting. You’d mostly be able to follow events, but the impact of character behavior won’t be what it should.

These are the characters we’ve come to love and loathe across the series. We get to know the oldies better, and there are a few new ones (yep it’s a surprise). We watch as DJ grapples with the conflict between her sentinel responsibilities and loyalty to her friends. Particularly interesting to watch is the evolving relationship between her and Alex, how they deal with her bond with Rand, her friendship with Jean, and their differing views of how to deal with those in authority. I like how Johnson is willing to face it and that DJ is honest with herself as she struggles to figure out what she really wants in a relationship.

Despite the story jumping in with two feet from the beginning, the action level isn’t as high-pitched as in previous books. Here the Council is dealing with the fallout from ELYSIAN FIELDS (read the review to get a refresher on the plot), handing out punishments, and attempting to establish a new treaty with the extant magical species (elves, faery, shapechangers, historical undead, vampires) so everybody can live in peace. Naturally everything blows up in the first meeting and DJ runs around trying to keep everything from falling apart and the news of Eugenie’s pregnancy from the Elders who would try to control her friend’s life. Council authority shifts around as a result, Elders trying to assert control in unfair ways, shifting alliances between magical communities, learning who can be believed and who can’t. It’s all a big political mess, and that means not as much action violence. Alas. Still, that doesn’t mean the pace isn’t as hectic as DJ runs around like a chicken with no head. Not that DJ isn’t clever and resourceful, and perfectly capable of surviving even the most dire of circumstances.

In PIRATE'S ALLEY, the observations are hilarious, descriptions are delightful, and her inner dialogue keeps me begging for more.

As in previous books, the New Orleans setting comes alive, as it struggles with a magical winter. We get to see DJ work her magic in old and new ways as she works around her limitations. The magic in this series between the different species shows little by little how they’re different and what they can–and cannot–do.

My favorite part of all the books is Johnson’s narrative style and voice. It’s told from DJ’s first person PoV. Her observations are hilarious, descriptions are delightful, and her inner dialogue keeps me begging for more. PIRATE’S ALLEY is a great addition to the series.