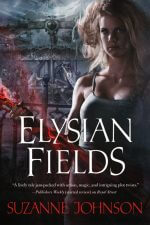 DJ Jaco, the sentinel for New Orleans, has proven her mettle. In ROYAL STREET (EBR Review), Hurricane Katrina changed boundaries with the Beyond, flooding the area with preternaturals, her mentor disappearing in the chaos. In RIVER ROAD (EBR Review) she solves a wizard’s murder and settles a mer feud. Now in ELYSIAN FIELDS by Suzanne Johnson (Amazon), it appears that one of the historic undead has emerged from the Beyond to continue what he started in 1918… as a serial killer.

But an undead serial killer isn’t the extent of her problems. Her friendship with newly turned loup-garou Jake is on the rocks and now her best friend Eugenie’s boyfriend Rand is making googly-eyes at DJ. Nothing seems to be going right… well, except that her relationship with Alex is heating up.

I enjoy DJ’s narration as she flails around, attempting to give the impression that she knows what she’s doing. She gets herself into all sorts of trouble–sometimes it’s her fault, but most of the time it isn’t. Her elven blood means that she has the attention of the Elf lords, which isn’t necessarily a good thing. The Elders send a wizard to give DJ elven magic lessons, but he’s a jerk. And no matter what she does, her problems only seem to get worse.

In ELYSIAN FIELDS, one of the historic undead has come from the Beyond to continue what he started in 1918 as a serial killer. Great addition to the series.

ELYSIAN FIELDS has a larger cast than previous books, but fortunately we’re familiar with enough of the regulars that we don’t get too overwhelmed. The good news is that the added variables notch up the excitement; the bad news is that someone trying to jump into the series starting with this book will get lost as a result of all the people involved. Fortunately, readers will be carried along in Johnson’s exciting pace up until the end, so if they just go with the flow, things work themselves out.

We learned more about DJ’s magic and how the world around her works in previous books; we do get to learn a little about Elves, but not a whole lot. Here it’s the politics of preternatural relations that drive the story more than the setting or DJ herself. And since it’s politics, the story felt a little convoluted as DJ discovered motives and those involved. I liked the previous books better because they were about the different preternaturals and DJ’s magic. But I get the feeling this is a set up for something bigger, and I’m definitely interested in seeing what happens next.