Review: On the Steel Breeze 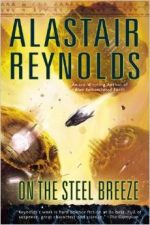 I recently had a conversation with a member of my extended family about the current tech surrounding virtual reality. He’s a game developer (his team did a lot of work for the F.E.A.R. games, if you’re familiar with them) and is neck deep in pushing the boundaries of what’s currently realizable. During our discussion, I was reminded of this series (Poseidon’s Children) and its “Augmented Reality” layer of vision. It was cool to talk about, in reality, the budding technology and current understanding that could very well lead to a fully realized human enhancement that I’d experienced in this series. Granted, Alastair Reynolds isn’t the first to use such a concept in his stories, but he did it in such an amazing way that it made an impact on my own life, and that’s just really cool stuff.

ON THE STEEL BREEZE (Amazon) is the second novel in the Poseidon’s Children trilogy published by Ace. I liked the first in the series, BLUE REMEMBERED EARTH (EBR Review), quite a bit more than our reviewer Shawn did. The only issue I had with it was that it made me depressed every time I stopped reading it because the real world was so very bland and mundane in comparison. Plus it had talking elephants. I mean, come on!

BREEZE starts up its story about two hundred years after the events of BLUE. In the intervening decades, Earth has spent its time building a fleet of massive holoships, asteroids hollowed out from the inside and then built up to support life, that are meant to transport a meaningful slice of the human population to the far-off planet of Crucible, where it is believed that a level of alien intelligence and a habitable atmosphere awaits them. This trip is possible due only to the revelation at the end of BLUE by Eunice Akinya of the Chibesa Principle that would eventually allow interstellar ships to travel at a significant fraction of the speed of light.

The story is predominantly told from the perspective of separate instances of a granddaughter of Eunice Akinya, Chiku Akinya. These instances are, in fact, rejuvenated clones of the original woman, each given a unique color, instead of a unique name, to differentiate them from one another. Chiku Yellow remained on Earth. Chiku Green went with the holoship fleet along with her husband and two children. Chiku Red jumped in a ship and raced off after her grandmother in hopes of catching her.

Compare to Mr. Reynolds other work, this didn't really strike me very hard.. As compared to SF at large, it's one of the better reads.

As usual, the very large strengths of the novel were characterization and inventiveness. The guy just has a million-and-one ideas in his bag of tricks and he never pulls any stops when it comes to loading the story up with fascinating science. Pace was a bit slow at times, but it was during those slow times that he ratcheted down the tension, click by click. Political tensions within the fleet cause no end of chaos for Chiku Green. Chiku Yellow, after being visited by a “ghost” apparition of her Green-self, launches off on a hunt for information and understanding concerning the data that is being collected by the holoship fleet as they approach the planet Crucible. Chiku Yellow’s story almost goes action-adventure as accident and destruction seem to topple into her path at every turn. And slowly we learned more about what the fleet will find at the end of their journey.

Possibly the only part of the novel that really didn’t push every single one of my buttons was the ending. The novel itself built us up for more excitement than what was there, and so that was somewhat disappointing. However, the introduction of a new threat upon arrival was enough to get me excited to read the final novel in the series and see the end of the story arc begun in BLUE.

There were times as I was reading when I was fighting with myself over what rating I’d give the book. There were pieces that I loved and others…not so much. When it came down to it though, I realized that I was only having a difficult time with it because of what I’d come to expect from Mr. Reynolds. When in fact, I compared my enjoyment of the book to those in the science fiction field at large, I realized that this one blew them out of the water just as Alastair’s books always did. So it wasn’t my favorite Alastair Reynolds book. It was still a freaking great read.