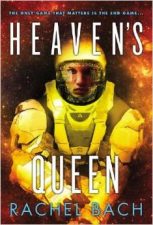 Devi’s life as a mercenary hasn’t led where she thought it would. In FORTUNE’S PAWN (EBR Review), she had recently struck out on her own for a job that would make or break her career. Working for Caldswell on his ship Glorious Fool could potentially land her a dream job as a Devastator for the king himself.

Unfortunately, things did not go as planned on Caldswell’s ship, and in HONOR’S KNIGHT (EBR Review) Devi finds herself on the run, as a carrier for the cure–or destruction–of the universe raging as a plague in her body.

But now, in HEAVEN’S QUEEN (Amazon), Devi is tired of running, and with Rupert at her side, she has a chance to see her plan through. However small.

No question, this is a fun series, and Rachel Bach doesn’t disappoint in this conclusion of Devi’s adventures (…for now? I hope we see more of her!). If you haven’t read the first two books, HEAVEN won’t make much sense, and they’re worth it. Book three carries the story along to an exciting conclusion. Devi is a well-written character, whose focus on doing the right inspires the man who loves her. She spent the first book shooting first and asking later. Now her experiences tell her that not everything is cut and dried, even among aliens you know as your enemies… or allies.

She’s come to the conclusion that doing the right thing will mean her death and it makes her reckless. Rupert is the super agent who regrets choosing his job over the woman he loves, and attempts to make amends with Devi. Despite liking these characters on their own, their love story gets mushy toward the end, and will definitely annoy some readers. Fortunately, it doesn’t get in the way of the story. We get to learn more about the fascinating Maat, which is a plus.

The story itself takes all the elements and knowledge from FORTUNE and HONOR and propels Devi toward a solution that will very likely mean her death. There are a lot of people who stand in her way, including her former employer Caldswell, ex-boyfriend, aliens–pretty much everybody. Everyone blocks her progress so often (some characters more than once) in the novel it makes the plot feel circular and I got impatient for the end. What really changes in this circular plotting is the pitch of danger they experience. As things go on, everything grows worse and worse for Devi and Rupert. The end is a little predictable, it is the natural progression of events after all, but that doesn’t mean I wasn’t satisfied, because I like how everything wrapped up.

Now in HEAVEN'S QUEEN, Devi is tired of running, and with Rupert at her side, she has a chance to see her plan through. However small.

I mentioned in my review for FORTUNE that the series looks like Military Science Fiction, but it’s really more Urban Fantasy set in space. And it still has that UF feel, perhaps even more so in this third book than in the first and second, due to the focus on the romance of our main characters. As a result of the romance the setting doesn’t build much beyond what was established in FORTUNE and HONOR; while there are things I would have liked to know more about, there wasn’t time because of the pace and focus of HEAVEN. Bach’s clean and descriptive prose is easy to read, and is consistent across the series.

In all the Paradox series is worth picking up, especially if you’re going to be doing any traveling this summer. It’s fun, the characters are interesting, and worth the time.