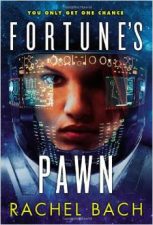 Working aboard the Glorious Fool turns out to be more than she anticipated, and Devi finds herself in more than one fight with terrible odds. But it turns out it’s not the enemy who will test her resolve…

You need to know straight up this is not military SciFi even if it looks like it. Think more… Urban Fantasy set in a spaceship. I’m not going so far as to stick it into the Books for Chicks category because I think it has enough to offer the guys, but it does lean more UF, despite the frequent weapon/armor/mercenary references. And I know the girl crushing on the guy thing may annoy some male readers (especially since it does feel a bit forced), but the story does not revolve around the love angle.

Devi Morris is a mercenary and she's good at her job. Her ambitions lead to service to the king, but she must first prove herself in FORTUNE'S PAWN.

FORTUNE’S PAWN (Amazon) is about Devi, our first-person narrator. She knows she’s good at her job, and makes no apology for her shoot-and-talk-later attitude. Rachel Bach writes tough female characters with a deft hand, without making them into men with boobs who have occasional emotional outbursts (as in the frustrating Kris Longknife books) or like the annoying know-it-alls of AN OFFICER’S DUTY (EBR Review). Devi is smart, but she’s not perfect and it does get her into trouble. Not only is our main character interesting, but I also enjoyed the secondary characters: the gruff captain, the mysterious and handsome cook Rupert, the grouchy aeon alien, stereotypical mercenary partner, and so on. They are enjoyable characters who are all integral to the story and bring out the best and worst in Devi.

Bach’s prose is crisp and fluid. I read this (and its sequel) very quickly. There are no wasted words, but the description makes it easy to imagine the universe Bach is creating. The world-building isn’t anything groundbreaking, but that’s ok, because the story is about Devi, and the setting exists to make her life more interesting. It’s never infodumpy and the aliens aren’t tacked on for fun but are an integral part of the story. Like the prose, the pace has great flow, moving quickly with frequent exciting scenes and just enough character/setting between action. The fight scenes are easy to visualize; issues with armor/weapons is integrated with problems battling aliens, all woven together in a way that made me believe Devi’s competence without feeling gimmicky.

In all I’d say the book is fun to read–not meaty, but not fluffy either. Devi is a great narrator, her observations are entertaining, and her behavior realistic. Despite the cliffhangerish ending, I was excited to read book #2 HONOR’S KNIGHT (Amazon), which I was lucky enough to have waiting for me on the shelf.