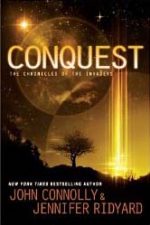 The chain of events continues from there as a result of that chance meeting. Their lives will never be the same.

I wanted to like this book. Rare is the YA Science Fiction with meaty content. Unfortunately, despite the big-name author on the cover and the hefty promises on the back, CONQUEST’s (Amazon) “meaty content” is more like chopped liver.

The first thing that bothered me about CONQUEST is the narrative style, which is exhaustingly expositional–by that I mean walls of text that tell us about the aliens, about the human-alien relationship, etc. Not only does this severely slow down the narrative (which is why it took me two months to slog through it) but it treats readers like idiots because the authors have to tells us what to think instead of showing us character behavior and letting us draw conclusions for ourselves. We are flooded with information that could have been interesting if it had actually moved the story along (the back cover calls it “densely plotted” HAH).

I believe they chose the omniscient PoV narrator initially because there’s so much readers need to know about the aliens, about Edinburgh, the Resistance, Paul, and other characters.  The result of omniscient narrative is distance from the characters because readers are continually pulled out of the story in order to explain in obnoxious detail about the back story. The authors try to fix the distance by dipping occasionally into the heads of the characters, but this takes the narrative out of omniscient into a sort of rotating third-person PoV, which was hard to follow. It felt very schizophrenic, not something an experienced writer would do.

CONQUEST is all very mushy and over-wrought, so I'm sure it will hook some unsuspecting females out there who don't know what real Science Fiction is.

Unfortunately, the writing style wasn’t the worst part. Perhaps I should make some bullet points so you can understand:

This has to be the blandest alien race I have ever read or seen. Even counting Star Trek. It’s like they wanted to write a romance story from Medieval England (Illyri overlords who take residence in the world’s old castles; Resistance members meeting in dank pubs á la LotR; and… wait for it… alien witches!), but that’s been done a hundred times, so make it present day and the conquerors are instead aliens and BOOM unique story, right?

The story begins to pick up about the 2/3 mark, with movement that builds on all the stuff (soooo much stuff) that went before. But then. Oh then. (Sigh.) Everything goes absurd. Teenagers fighting experienced soldiers. Secrets are revealed. Political machinations among the aliens ruins lives (sounds human, right?). Even alien-human love stories.

I’m sure there’s some teenage girl out there who will love this book. It’s all very mushy and over-wrought (rather like TWILIGHT), so I’m sure it will hook some unsuspecting females out there who don’t know what real Science Fiction is about. And it will be their loss.

Series links:  Chronicles of the Invaders