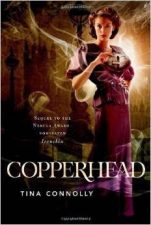 Helen thinks she can’t do anything right. Of course those realizations are all after the fact. Take, for example, the marriage to her husband Alastair six months ago. At the time it was the best possible thing for her, and she even thought she could grow to really love him. But lately she’s discovered he’s not who she thought he was.

A lot of that is due to his new involvement with Copperhead, a group of men who want to rid the city of fey and dwarvven. Completely. In IRONSKIN (Amazon), Helen discovered the dangers of the fey personally, so her fear is genuine. But she’s still of the “live and let life” philosophy and finds Copperhead’s methods alarming.

In a desire to be useful, Helen agrees to help her sister Jane convince the fashionable ladies of society that keeping the fey faces that make them beautiful actually put them in danger. But will she mess this up, too?

Set in an alternative England of the early 1900s, you can jump into COPPERHEARD (Amazon) without having read IRONSKIN. It’s a fun series with interesting characters and a well-plotted mystery. The first book was told from Helen’s sister Jane’s PoV, but here she takes a back seat. I especially enjoyed Helen’s PoV voice, her wry observations, and her personal struggle to understand herself and the people around her. She’s not as feisty as other heroines, but that doesn’t make her contributions insignificant. Rather like Eff Rothmer in THE FAR WEST (EBR Review); but where Eff is thoughtful and conscientious, Helen is determined and competent… if rather vain. The secondary characters were well-drawn and fun to read, particularly the flamboyant Eglantine and her menagerie of hangers-on.

COPPERHEAD has themes of racism, women's rights, and suffrage dealt with a subtle hand. A story of capable women in a world that would pass them by.

The one thing I wish I knew more about was the fey. There’s more here about the Great War than in IRONSKIN, but the story doesn’t expand much beyond talking about a Fey King (there used to be a queen) who punishes fey by ripping them apart and leaving blue vapor bits around town. Fey energy is used for lights and other devices. We do learn that fey can take over a person who has fey on their body… say a fey face like Helen and the society ladies. And how magic in her face gives her emphatic abilities. Fortunately there were enough details that the story made sense.

Connolly deals with themes of racism, women’s rights in marriage/divorce, and suffrage with a subtle hand. She blends these issues in a story about women who are capable in a world that would pass them by. And by the end you will see Helen for the heroine she doesn’t know she is.