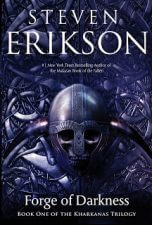 You all know how big a fan I am of Steven Erikson. He single-handedly changed my views on the Fantasy genre, and he has written some of my favorite novels. Ever. When people ask who my favorite authors are, the first one I always say is Steven Erikson.

All that said, I’m a reviewer. I understand why people don’t like his work. That’s fine. Not everyone reads and likes the same things, and that is how the world of literature should be. But I would be lying if I said it didn’t make me a tad disappointed whenever someone says they just couldn’t “get into” Erikson’s Malazan series. There are so many unbelievable characters in that series, and the stories of the rise and fall of entire civilizations are spectacular.

FORGE OF DARKNESS (Amazon), the first novel in Erikson’s Kharkanas Trilogy, was the novel I hoped would bring in all those readers who wanted a different starting point to Erikson’s work. It is a prequel to the Malazan Book of the Fallen 10-novel epic, and it both succeeds and fails.

I’ll start with appealing to those of you who, like myself, have read the full Malazan series. Did you ever want to know more about Anomander Rake? How about Silchas Ruin and Andarist? Draconus maybe? Perhaps Caladan Brood? I’ve always wanted more info on Mother Dark. I’m hardly scratching the surface here, but can you see why the prospect of a novel following all these individuals could be so dang exciting?

Here is the description from Amazon:

It’s a conflicted time in Kurald Galain, the realm of Darkness, where Mother Dark reigns. But this ancient land was once home to many a power. and even death is not quite eternal. The commoners’ great hero, Vatha Urusander, is being promoted by his followers to take Mother Dark’s hand in marriage, but her Consort, Lord Draconus, stands in the way of such ambitions. The impending clash sends fissures throughout the realm, and as the rumors of civil war burn through the masses, an ancient power emerges from the long dead seas. Caught in the middle of it all are the First Sons of Darkness, Anomander, Andarist, and Silchas Ruin of the Purake Hold…

From the instant I opened the book and read the opening, I knew I was reading an Erikson novel. His style is so distinct, and his writing beautiful even when describing the most horrible things. It was interesting to see such a different view-point on the Tiste, and specifically on the Sons of Darkness. Anomander became one of my favorite characters in all of fiction when I first read GARDENS OF THE MOON (EBR Review) those many years ago. I couldn’t help but feel giddy when he made his first appearance in FORGE OF DARKNESS. The feeling was equally strong when Draconus showed up.

And then we don’t really get much of them in the rest of the novel.

Yeah. I kept waiting for the next chapter to get back to those men who would become giants in the Malazan series, but it kept getting postponed by the PoVs of a dozen other characters (who also go on to have roles in the Malazan series). At first, this bugged me–and it is something you should be aware of as a reader–but once I stopped focusing on what I was expecting through preconceived notions of what the book should be about, I was able to focus on what the novel was actually about.

Every story starts somewhere. Much of what makes the Malazan Book of the Fallen awesome has its roots in the Kharkanas Trilogy. So many of the characters in that 10-book epic are so tough, so incredible, and being able to see them in a much younger stage of development was extremely rewarding. I was struck how it served as a form of reverse character development. Many times we got such a limited view of the characters in The Malazan Book of the Fallen, or we saw them at their zenith. Now, finally, we see the decisions that led to the consequences in GARDENS OF THE MOON and beyond.

Now, FORGE OF DARKNESS isn’t all roses. While I ended up really liking the side characters, I noticed one thing about all of them that really began bothering me towards the latter portion of the novel. Erikson really likes his characters to have philosophical discussions. In other novels, Erikson would limit this to certain PoVs. Not so here. I swear that every character–man, woman, child, Tiste, horse, Jaghut, soldier, corpse, or dog–took a moment to delve into a deep discussion on random bits of philosophy. I like certain characters to go that route, but not ALL of them. It’s like how I often point out how Brandon Sanderson makes all of his characters overly witty in a few of his books. I like it a little bit, but not with everyone. Heck, remember Karsa? There came a point where even he says, “Enough talk. Witness.”

Lastly, after the initial cool factor of seeing your favorite characters for the first time, the novel slows WAY down. It’s mostly talking, even at the end. We get a few battles, but no “convergence” clashes of epic magnitude. I appreciate the political manipulations that pervade the novel, but there comes a point where the pace needs to be picked up. Hopefully we will see this in book 2.

FORGE OF DARKNESS is an incredible novel, but don't start here. Start with GARDENS OF THE MOON. If you are already a fan, this book is a must-read.

The end result of all of this is that FORGE OF DARKNESS is an incredible novel for a fan of Erikson’s work. I’m that guy. I loved it. But as a reviewer, and as a guy that wants more people to read Erikson’s work, I can’t help but feel it was a missed opportunity to pull in even more new readers.

FORGE OF DARKNESS is an incredible novel, but my opinion is that you shouldn’t start here. You should start with GARDENS OF THE MOON just as before. If you are already a fan, this book is a must-read. And as ever, I look forward to the next Erikson novel.