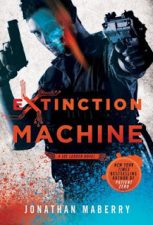 Eeek! It’s Joe Ledger time! Please allow me a moment to geek out… Thanks, I needed that. Here we have EXTINCTION MACHINE (Amazon), the fifth Joe Ledger Novel by Jonathan Maberry. I’ll admit, I was a little panicked going into EXTINCTION MACHINE because I saw some rumor online declaring it the last Joe Ledger Novel. The good news is: this rumor was pure speculation, there is a sixth book in the works. The great news is: it will be called CODE Z, and it is a direct sequel to the debut Joe Ledger Novel – PATIENT ZERO (EBR Review). So with that dreary cloud of depression safely behind us, let’s get on with the show!

Joe Ledger and the Department of Military Sciences have faced everything from zombies to transgenic monsters, from the Ten Plagues of Egypt to vampires. Now they find themselves contending with UFO’s, crop circles, reverse engineered alien technology, Men in Black, government cover-ups, and secret cabals. The President of the United States of America has been abducted by persons unknown and the fate of the world once again rests in the calloused hands of Echo Team.

With Jonathan Maberry’s Joe Ledger Novels you can always expect the unexpected. But aliens? Aliens?! I’ll tell you what, that really came out of left field. To be fair, I never expected Ledger and Echo Team to face off against vampires either but I consider ASSASSIN’S CODE (EBR Review) to be Maberry’s best novel to date. In a lot of ways Maberry is the inverse to Larry Correia. Both are phenomenal authors that write high-octane thrillers but Maberry pens speculative science techno-thrillers where Correia is the master of urban fantasy. Before going into EXTINCTION MACHINE I figured that if Maberry could convincingly write plausible zombies, monsters, and vampires then he could manage to do the same with UFO’s. And you know what? Sometimes it pays to bet on the House.

EXTINCTION MACHINE kicks off with a bang, raising the stakes right out of the gate. Joe and Echo Team get their butts handed to them, quite an uncommon occurrence. The President gets taken from the White House right under the noses of the Secret Service, the abductors leaving only a crop circle in their wake. As we go further down the rabbit hole we learn that maybe those conspiracy theory whackos aren’t so crazy after all. Maberry treats the concept with respect and so it never seems silly or over-the-top. EXTINCTION MACHINE is never dull, and frequently had me going to my laptop for research. I consider it an accomplishment when I get so invested in a book that I need to know if some of the material is based in fact. I don’t think that Dan Brown’s THE DA VINCI CODE (Amazon) is a masterpiece of literature but it had a similar effect on me. I believe that aliens exist somewhere out there in the universe, though I’ve never put much faith in alien visitation of Earth or UFO’s. It could be that EXTINCTION MACHINE has shifted my mindset slightly – but that’s beside the point.

The point is that this is a door-breaching, flashbang-banging, helluva good time. Those of you who have been following this series know the score by now. Joe Ledger is the Jack Bauer of mad science threats to the United States (and the world). He has rage issues developed by childhood trauma and a fractured psyche. He juggles three personalities – the ever diminishing, idealistic Modern Man, the patient and inquisitive Detective, and the bloodthirsty Warrior. When the Warrior persona is triggered, Joe Ledger becomes a human WMD. Having faced all manner of weird and terrifying foes in the past, Joe displays what I would consider to be the proper amount of skepticism for UFO’s and reverse-engineered alien technology in EXTINCTION MACHINE. Obviously being tossed head first into a world of aluminum foil hats and little green men would be a shock for one as cynical and battle hardened as Joe, but his reluctance does not transform into full blown, obtuse ignorance.

The rest of the Department of Military Sciences is back in form. As always, Mr. Church is mysterious and intimidating in equal measure (seriously, when is this guy going to get a spinoff novel about his time in the field? Make it happen Mr. Maberry). Top Sims and Bunny are training the new batch of cannon fodder — I mean, the new members of Echo Team. Rudy Sanchez, the Jar Jar Binks of the Joe Ledger Novels, is getting married to Circe O’Tree. Fortunately for all, Rudy’s involvement in EXTINCTION MACHINE is minimal. Dios Mio! Best of all, Joe’s combat dog Ghost is back. It’s funny but Ghost has more character than most of the human cast. He’s a lovable companion and a fierce asset in the war on strange evil.

As far as new characters go I took an immediate liking to Junie Flynn. Though, I do have a complaint to make. Is it possible to introduce a female character without her ending up as someone’s romantic interest (specifically Joe’s)? I’m not a feminist or anything. I don’t jump every time I see women misrepresented in fiction because frankly, I see people of all types misrepresented. But when it comes to Joe Ledger romances I’m automatically put-off. The relationship with Grace Courtland felt forced and instead of giving it time to develop it was cut off quickly, leaving Joe to mope around like a teenager. It was traumatic, I’ll admit, but readers were given no time to warm to the relationship to even care. I feared early on in THE KING OF PLAGUES (EBR Review) that Circe O’Tree would wind up as Joe’s next conquest.  That didn’t turn out to be the case but she did wind up with Jar Jar. With ASSASSIN’S CODE it was clear that the obligatory mourning period was over and a new romantic interest would be introduced to the plot. And now with EXTINCTION MACHINE we get Junie Flynn. I apologize if this smacks of ranting but poorly written romances don’t sit well with me.

The villains of EXTINCTION MACHINE tread the line between campy Bond ne’er-do-wells and frightening sociopaths. They aren’t as memorable as past villains. At one point Howard Shelton commits that ultimate unforgivable sin of super-villainy – he fails to kill Ledger when he has the opportunity and instead chooses to monologue his evil scheme. I will say this, at least Shelton has somewhat good intentions, but he does fall lean more heavily on the “Bond ne’er-do-well” side of the line.

During the first half, EXTINCTION MACHINE feels slightly scattered. Joe’s First Person POV falls by the wayside and much of the story is told from the Third Person perspective of secondary characters and villains. This method has pros and cons. On the plus side, readers get a broad view of the picture. There a many moving pieces and this helps readers find their bearing. On the minus side, the pacing flags. Don’t get me wrong, it’s still relentless, but Joe’s arc suffers from the disrupted flow of the narrative. Maberry deftly wields short chapters and pseudo-cliffhangers to keep readers going, “I’ll put the book down and feed the kids honey I swear! Just one more chapter…” It’s a wise format that may result in your untimely divorce – also very Dan Brown’esque in its execution.

EXTINCTION MACHINE is a Joe Ledger Novel through and through. It stays true to form, offering readers bone-crunching action, snarky dialogue, and twisted revelations. This entry in the series shares much in common with Men in Black, X-Files, Fringe, and even the video game Crysis. On a scale of my favorite Joe Ledger novels this falls right after ASSASSIN’S CODE. If you haven’t yet picked up the series, now would be the time to do so. Oh, and Go Orioles!