Review: The King of Plagues 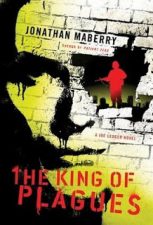 In case there was any ambiguity before, we want to set the record straight regarding Jonathan Maberry. He is freaking awesome. On every freaking level. Maberry’s THE KING OF PLAGUES (Amazon) was just released, giving us our much needed Joe Ledger fix.

In this latest novel, Joe Ledger is drawn back into the world of horror and terrorism when the Royal London Hospital is leveled by bombs without any warning. As the death toll rises, Ledger realizes he can’t watch from the sidelines–regardless of his life being left in shambles following the climatic events of THE DRAGON FACTORY (EBR Review). Ledger faces off against old enemies and new as a secret group weaponizes the Ten Plagues of Egypt.

It’s easy to point at Maberry’s ability to write action as the best part of his work. It IS fantastic. While unashamedly being over-the-top at times (not a bad thing–we love it in this series), the action scenes in THE KING OF PLAGUES are always crisp, brutal and easily pictured. No, as well as Maberry does action, he does character better.

We absolutely love the characters in the Joe Ledger series, and their progression in THE KING OF PLAGUES is top-notch. One thing that Maberry always manages to do is have his characters behave in realistic ways. Joe Ledger for example has faced terrorists, zombies, Nazi-clones, genetic monsters and now plagues. Many other authors would say, “Oh, well, my character is freaking awesome. Nothing phases him.” Not Maberry. His characters are continually hammered emotionally and psychologically. The horrors they face actually affect the characters. Remember, one of the characters is the shrink for the DMS (more on him later). What this does is create a very real sense of danger for the characters Maberry is writing. He has no qualms about killing main characters (we’re still feeling one in particular), but Maberry also seems keenly aware that killing a character isn’t the worst thing you can do. No, scaring them psychologically can be FAR worse. If only more authors could find this delicate balance…

The great thing is that Maberry does a perfect job of showing just how damaged Joe Ledger really is. With every new person he meets, Joe can’t quite hide all of his emotional scarring. Joe tries to cover his issues with jokes and sarcasm–always perfectly timed and written–but it becomes more and more apparent that Joe barely keeping his head above water.

There are a few things we should point out that took away slightly from the overall experience. None of them are huge issues, but in a book this good the little things have a way of standing out. First is the passage of time. For the readers, it has been a few years reading these novels. For Joe, it has been several months. It becomes difficult for the reader to remember that all of this is happening all in a really short amount of time. It magnifies the stress Joe has been under, but because of the time between novels the reader won’t necessarily get that full impact. The solution? Heck if we know. Just keep the time-line in mind, we guess.

One of the other issues has to do with the PoVs. The Joe Ledger PoV is in first person while the others are in 3rd Limited. Nothing wrong with this. Our small problem is that it seems like Joe is featured less than what he deserves. It was Joe Ledger that made us instantly love PATIENT ZERO (EBR Review). Like THE DRAGON FACTORY before it, THE KING OF PLAGUES focuses a bit too much on the secondary characters. This is more of a subjective thing, but we like Joe Ledger a lot, and want to see more of his exploits. We want him right at the center of the action.

Almost in direct opposition to the previous issue, we felt Rudy was under used. He is a great character, and in desperate need of some more PoV time. Again, a very minor problem we had.

THE KING OF PLAGUES is a thrill-ride of a novel. The pace is fast and furious. the action gripping. The terror and horror described and executed perfectly.

Yeah, that’s it. We didn’t have any other problems, and those small issues we had are so ridiculously minor. The novel was THAT good. We get big, stupid grins on our faces every time we even think of this series.

THE KING OF PLAGUES is a freaking thrill-ride of a novel. The pace is fast and furious. the action gripping. The terror and horror described and executed perfectly. The humor spot-on. Is it any wonder that Jonathan Maberry is on of our absolute favorite authors?

If you haven’t started this series, you are missing out on one of the most fun series in print.