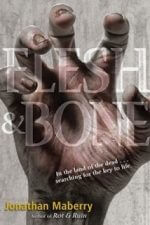 Jonathan Maberry makes it all look so easy, doesn’t he? Book after book is released with his name gracing the cover, and we all snatch them up greedily. Why? Because a Jonathan Maberry novel never disappoints.

FLESH & BONE (Amazon) is no different.

The third novel in the Benny Imura series continues a short time after the events of the second novel, DUST & DECAY (EBR Review). Before I go on, I should mention (in case you have yet to begin this fantastic series) that the Benny Imura series is YA following a small group of teenagers living in a world after the zombie apocalypse has happened. As the first novel, ROT & RUIN (EBR Review), closes, the group of teens sees a jumbo jet flying in the sky. This incident pushes them to go out into the wild to find it.

Like the previous novels, FLESH & BONE follows Benny Imura, Nix, Lilah and Chong. In my review of DUST & DECAY, I said that it felt like that novel was more like an alternate ending to the first book more than a true sequel. I enjoyed the novel, but I still wanted more. I wanted more details. I wanted to see more of the world. I wanted new and different dangers. FLESH & BONE does all of these things, and Maberry literally starts throwing them at you from the first page.

It turns out that in the Rot & Ruin (the name for the wilderness in this series), there is a strange death cult growing in numbers. They go from place to place, settlement to settlement, and… free… people from their existences.

Oh, and there are zombies out there. Lots and lots of zombies. And they are acting far different than usual.

Jonathan Maberry's Benny Imura series sits right up at the top of the YA genre. His knack for action and character drama makes them highly entertaining.

The great thing about this novel, apart from the refreshing plot, is the emphasis on character growth and relationships. Each of these characters have been through a lot, and it isn’t until this novel that they really begin to deal with the emotional fallout of the terrible experiences they’ve participated in. It really becomes a question of loss, and how these characters deal with it.

The villains of FLESH & BONE are very entertaining. To me, Maberry is fantastic at portraying each villain as a unique character with unique motivations. It would be easy, especially in a YA novel (as we’ve all seen so many times), to make the villains flat and boring. Many authors seem to think that villains in YA novels don’t need to be fully developed, and don’t develop them. Maberry’s villains come to life on the page. Sure, sometimes they are a bit over-the-top, but they are always developed.

As for new characters… well, I can’t say much without ruining the surprise. Let’s just say one of the new characters introduced brings a whole different light to the series.

FLESH & BONE may actually be the darkest of the Benny Imura series. The toil on the characters is high, and Maberry doesn’t pull punches when putting his characters in danger.

I’ve read a lot of YA lately, and still I find Jonathan Maberry’s Benny Imura series sits towards the top of it all. His knack for writing action and character drama makes all his works highly entertaining.