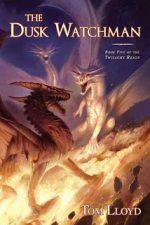 Oh man. I don’t even hardly know where to begin. It seems like only yesterday that Pyr’s Lou Anders was talking up this new series he had acquired. It all started with Tom Lloyd‘s THE STORMCALLER, and Lou Anders was telling everyone who would listen that it was the start of a series that would please all those rabid Steven Erikson fans. Being one of those Erikson fans myself, I was intrigued. I personally picked it up based solely on Anders’ description.

Fast-forward several years later, and here we are with the fifth and final novel in The Twilight Reign. THE DUSK WATCHMAN (Amazon). I had the privilege of reading this novel quite a while ago, and it’s been absolute agony not having anyone to talk with about it. I was going to wait for the US release of the novel to write up this review, but I just can’t do it. Not enough willpower.

I’m just too dang excited to tell you what I think of this novel, and the series as a whole.

THE DUSK WATCHMAN was incredible. Absolutely stunning. One of the best Fantasy novels I’ve read.

It’s extremely hard to write a review like this. I just want to keep screaming out that the novel is awesome over and over again. I mean, what else do I need to say? Just buy the freaking book! The whole series! Get it for family, friends and strangers! Most importantly, send me the UK versions of books 4 and 5 so I have a matching set!

Then I take a deep breath, and let the reviewer take over.

THE DUSK WATCHMAN takes place right after the carnage of book 4, THE RAGGED MAN. I really, really want to talk about that ending, because it plays heavily into the motivations of Isak, Vesna, Emin and the rest, but that would be spoiling both novels. Instead, let’s talk a bit about the themes of THE DUSK WATCHMAN, and the overall feel of it.

First, THE DUSK WATCHMAN deals with consequences. The cast of the series has put themselves on the line countless times, and they’ve sacrificed literally everything to stop the evil which is now present in the world. And guess what? It hasn’t been enough. All that sacrifice. All that pain. All that anguish. It’s barely kept The Land afloat. To get a little bit into the plot of the novel (without spoiling any of the surprise), our heroes discover further hints as to a weapon that could potentially alter the downward spiral of the world.

That’s all the characters of THE DUSK WATCHMAN have. Hope.

THE DUSK WATCHMAN not only is the best novel in The Twilight Reign, but it's a capstone to one of the most enjoyable fantasy series I've ever read.

This is a very bleak novel. Every character has been shattered in either their body or mind–or sometimes both. And even with all the death and destruction–and yes, even MORE sacrifice–there is that tiny, delicate thread of hope that has somehow been woven into the novel. If there is one thing that I can point at with Tom Lloyd’s progressing work, it is his ability to successfully weave a variety of contradicting emotions into his novels. Every time you read a section with Isak, you will feel this. Every time you read a section from Vesna, you will feel this. All I can do is applaud the author for such a deft handling of heavy material.

In my review of THE RAGGED MAN, I asked for some more variety in the locations the readers would visit. Lloyd did it. He gave me exactly what I wanted, and I loved it. You want details? Too bad. Go buy the novel and read those details for yourself.

The ending. Wow. Just…wow. This isn’t just an ending for a novel. This is the ending for an entire series. When an author begins a series, he makes a promise. This promise usually goes unfulfilled. I’ve read so many series that fail at this critical junction. The endings fall flat, or characters do stupid things so the plot can progress…or we don’t even get the final book at all. I’ve read very few finale novels where the ending made the entire series completely worth it.

THE DUSK WATCHMAN has one of the most insane, awesome endings of any series I’ve read… and then the Epilogue completely makes you rethink EVERYTHING.  It’s the type of ending that you read two or three times, not because it isn’t clear, but because it is sooooooo good. Again, it is equally heart-wrenching and triumphant. The last time I felt this satisfied by a series finale was when I read Erikson’s THE CRIPPLED GOD (EBR Review).

I suppose that the best compliment I can give Tom Lloyd is that I was 100% impressed by THE DUSK WATCHMAN. He scratched every itch I had, and even a few I didn’t know existed. I hesitate to use the word “perfect”… but I’m just so blown away by how this all came together. Is there another word? Stunning? Exceptional? Pick one, and it will likely be true.