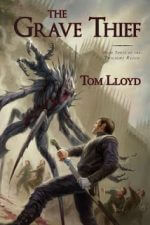 Every now and then, we get a little hesitant to pick up and read a novel. We know, this is a dangerous admission on our part–believe it or not we are human sometimes (the rest of the time we are Review Gods, remember?). You see, when we find a series of novels that we like, each subsequent novel in that series becomes more exciting and terrifying to pick up. Why? Because we are afraid of being let down (read: Jim Butcher).

You, faithful readers, may recall our review of Tom Lloyd‘s THE TWILIGHT HERALD (EBR Review) a few weeks back. We loved it, and said you all should go out and worship Mr. Lloyd. We recently received a lovely care-package from Pyr SF&F that contained Lloyd’s THE GRAVE THIEF (Amazon). Yeah, Nick squealed and passed out like a teenage girl at a Beatles concert. Seriously. We were quite nervous to start this novel. What if it wasn’t as good as the first two? What if we hated it? What if he (Tom Lloyd) decided to throw his aspirations to be an author out the window? We’ve been talking with Lloyd since our last review of one of his books, and in a recent email, he told us what he hoped to accomplish with THE GRAVE THIEF:

“The middle novel of a series is a tough one to approach – you know there’s going to be a lot left open and a lot has been dictated by events of the previous two. Hopefully I’ve dealt with that by surprising the reader at points. Along the way there might be the odd comment on fanaticism, ethics in politics and war, duty, loyalty, and fear – but mainly it’s angry daemons an’ stuff.”

See, even Tom was worried a bit! So, how was the novel? Did Tom Lloyd deliver? If we could only use two words to describe it, what would we say?

Pretty dang cool. (Well… math was never our strong suit. We can’t be good at EVERYTHING… just MOST everything.)

Luckily, we get more than two (or three…) words to tell you what makes this novel so brilliant.

THE GRAVE THIEF builds itself around the results of the ending in the second book, THE TWILIGHT HERALD, which was explosive to say the least. It’s hard to keep that excitement, so we will admit–and assume that Tom would agree–that there is a bit of a adrenaline drain at the onset of this third installment. However, with the great cast of characters, an expansive, original and interesting world, and the rising feel and threat of conflict… well, let’s just say that adrenaline drain didn’t last long. At all.

The events in the second book leave the characters feeling somewhat overwhelmed, beleaguered, haunted, and downright stressed out and the third book capitalizes on that.

And… wait for it… the novel takes a turn for the ominous and dark! Yay!

While THE GRAVE THIEF is the middle child of Tom’s series, he certainly went to efforts to make sure it wasn’t easily dismissed. The characters are all given a significant and enjoyable amount of ‘screen-time’. None of them felt like they were hogging the spotlight, which meant we never felt like we wanted to skip a few pages (you know you’ve done this in novels before). This was a hard feat to accomplish, especially in light of the darkening moods and attitudes of some of the characters. And this is exactly where the third book shines. It is evocative in it’s mood and emotion. Something that helped us through the slower moments. It impresses us tremendously that Tom was able to take something that could have ruined this novel, and make it one of the strongest aspects instead.

THE GRAVE THIEF is epic fantasy done extremely well, and Tom Lloyd had assured that he is an author with staying power.

The book is engaging and heavily thematic, but there is seriously a lot going on here, both in overt and subtle ways. There are so many new threads and plot-lines that are added and fleshed out here that we just about felt overwhelmed. Just about, but not quite. THE GRAVE THIEF kept us right on the edge. Tom’s writing paints a beautiful picture, and uses those threads to make us want more and more. And yes, it is obvious that there is more to come. A lot more.

The focus in this book are the topics of politics, religious fanaticism, and the resulting conflict from those things. We like this sort of stuff, but it did slow the book down quite a bit compared to the earlier two. There are some real world issues that are reflected here in Tom’s writing, but it dodges the pitfalls of writing with an agenda. Something a lot of authors could learn from (Was that subtle enough? Did you get who we were pointing the finger at?).

Now with all that said with regards to the slower parts and the focus of the novel, we can move on to the action. The action is, as we have come to expect from this series, nothing short of incredible. We loved every minute of it, and we even reread some of the scenes a second and third time for the sheer pleasure of it. Not to be outdone by the extremely fun conclusion to THE TWILIGHT HERALD, Tom reaches new heights in this books finale. It isn’t as grand or epic as the the previous book’s ending but it will drop your jaw. The last chapter alone is worth the cover price of the novel. Luckily for us, and you all, the entire book is worth it too.

So the answer to the burning question that you all certainly have is: Yes, this is epic fantasy done extremely well, and Tom Lloyd had assured that he is an author with staying power. THE GRAVE THIEF is different, darker, and slower, yet retains the stuff we love about this series and is a worthy addition to that series and we can’t wait for THE RAGGED MAN, the next installment.

In case you didn’t get the hint, go buy THE GRAVE THIEF (Amazon) right now! It was released this week!

Go email Tom at http://www.tomlloyd.co.uk/contact.html and tell him how much you love him. Because we know you do. Also keep an eye out in the next little while. We have a series of interviews planned, in which Tom has agreed to feature in. (Can you guess how excited we are? WEEEEEE!!)