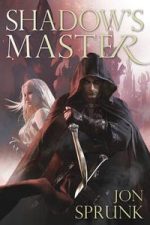 SHADOW’S MASTER (Amazon) is Jon Sprunk‘s concluding volume (maybe) to his assassin-themed series published by Pyr. It’s a series of books that I quite enjoy due to its fast-paced nature, fun characters and extreme quantities of action. The first novel, SHADOW’S SON (EBR Review), was a great debut novel that lacked some polish while tempting readers with its potential. SHADOW’S LURE (EBR Review) was about as good of a sequel as I could ask for. It improved on nearly all my problems from the first novel.

So all that was left was my wondering whether or not the third novel in the trilogy could effectively close out this series. For the most part it succeeds.

Again our story mainly follows Caim as he trudges ever further north in search of answers to his past. The ending of SHADOW’S LURE hinted at some things in his family’s past that he finds impossible to ignore. As Caim travels north with a few companions, the story will shift periodically to Josey who is leading her empire’s army to repel an incursion by enemy forces.

There was never any real doubt in my mind that Caim’s sections would be good. Sprunk understands exactly what he wants to accomplish with his assassin, and it shows in the PoVs. Caim never does anything out of character, allowing the reader to just sit back and enjoy his sections. His relationship with Kit is well done if a tad predictable. His companions that travel north with him are fairly flat, but Sprunk never really pretends they are anything more than what they are. The focus is on Caim and his personal and physical journey.

Josey’s sections, unfortunately, still don’t do it for me. I never really felt her story was adding much to the progression of… well, anything really. She’s a side character that is flushed out a little more than the others, but I personally found it difficult to really buy-in to her predicaments. Her physical condition (no spoilers for those of you still on the fence about the series) really doesn’t end up mattering much, so I found myself wondering why it was even part of the story.

The action, as expected, is extremely well done when it relates to small groups fighting each other. It’s fun, smooth and easy to visualize. Caim’s issues with his magic are appropriately cloudy I think. There is a fine line in many novels between learning how to do things with a new power and accidentally solving everything with your powers to save the day. Caim seemed to learn enough to actually make his accomplishments believable–plus he didn’t do everything on his own, another thing I like.

On the other hand Sprunk makes an attempt at some large-scale battle towards the end of SHADOW’S MASTER, and it doesn’t fare as well. It’s not that it’s bad, it just doesn’t have any detail at all. There is all this build-up to a huge mass battle… and then it is essentially over in a page or two. It really makes that portion of the finale feel lacking.

SHADOW'S MASTER was a very enjoyable book that was on-par with the second of the series. The ending, while feeling rushed, was pretty solid.

All that said, this was a very enjoyable book that was on-par with the second of the series. The ending, while feeling rushed, was actually pretty solid–I just wish it had been 50 pages longer to give me a real sense of the chaos going on. The relationship resolution between Josey and Caim was handled well, and I also thought the body-count amongst the side characters was well done. The bad guys were a nice mix of straight-up bad to sympathetic. Yeah, I liked SHADOW’S MASTER quite a bit.

Now, a couple of things before I finish off this review. First, due to the improvement I’ve seen in Sprunk’s writing, I will read anything he puts out in the future. And after reading the ending of SHADOWS MASTER I was left wondering if he was going to revisit this world. There is a ton of potential here, and there were some hints that Sprunk would be perhaps giving some more assassin novels in the future. I certainly hope so.

Lastly, an observation. As a reviewer I often will finish off a book and feel slightly bummed out. Why? Because I have little faith that the author would be able to actually improve his/her craft in future works. On the other hand, after reading books by a guy like Jon Sprunk, I end up a little excited over the problems a book has. I know it sounds weird, but stick with me. Even with the small problems, I have a really good feeling about Sprunk’s writing future. I think he has all the skill and potential to fix all this stuff and write some truly awesome novels. I see 3 places for improvement. 1) Detailed descriptions to make environments easy to visualize. Right now I often feel like I’m in a blank room with the characters floating in it. 2) Mass battles need some research and work. I’d like to see Sprunk get to Barclay’s CRY OF THE NEWBORN and Tchaikovsky’s novels in terms of detail for large-scale battles. 3) Side characters need improvement. I shouldn’t ever wonder what the point of a side story is.

It sounds like a big deal, but I’m actually really excited to see Sprunk pull it off. I’ve already seen a ton of improvement in his ability, so I have every bit of confidence that he can do it going forward.

The short version? Go buy Sprunk’s novels. They are great pieces of assassin-themed fantasy that everyone should be enjoying.