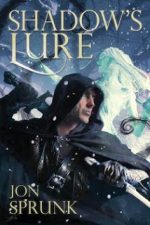 There is just something about assassin novels that I love. A while back when I read Jon Sprunk‘s SHADOW’S SON (EBR Review), I was immediately struck by how smooth the novel was, and how fun the main character was. Sprunk’s first novel wasn’t perfect, but it was loaded with promise.

As you all know by now, when it comes to judging new authors I use a slightly different measuring stick. With the first book I want to be pleasantly surprised. The second book is all about improvement. I’m happy to report (and very relieved, because Sprunk is a ridiculously nice guy with an even nicer wife) that Sprunk’s second novel SHADOW’S LURE (Amazon) is better in nearly every way when compared to his first novel.

SHADOW’S LURE begins a very short time following the events of SHADOW’S SON. Our awesome assassin, Caim, is off in self-imposed exile attempting to figure out his past. With him, of course, is the ghost-like and gorgeous Kit whom only Caim can see. Josey is back as well, and most of her time is spent adjusting to being Empress.

The truly great parts of the novel all take place with Caim “on-screen”. He is a terrific character who is as inwardly insecure as he is outwardly stone-cold awesome. I love assassin novels and stories because that typically means I will get tons of action. The body count of SHADOW’S LURE is high as Caim is caught up in a war between the normal world and the Shadow. I judge action pretty hard, because I’ve read some pretty amazing action sequences over the years. If an author doesn’t do action well, I will call attention to that fact every time. Sprunk does action well. It is smooth like the assassin this book contains, and deliciously brutal.

Josey’s parts are the weakest of the novel. Caim makes all the side characters around him better, and since he isn’t around, Josey’s sections lag. What’s more is that there is a little bit of Elayne from The Wheel of Time in here–something that strikes fear into the core of my soul. If you notice this like I did, have no fear, Josey does grow out of it by the end of the novel, but I was panicking for a bit there. Overall her character was just “OK” to me. Not bad, but she didn’t excel either. Can you guess what one of my main hopes for book 3 is?

I liked SHADOW'S LURE a lot. It was a fun, fast, action-packed novel that left me eager to read the follow-up. A story that is bookended with awesome.

What I loved about SHADOW’S LURE was the scope of the story. It was still focused on the individual characters, but events were so much bigger than in book one. For the most part Sprunk handled it all very well, and I’m impressed with his growth in ability from SHADOW’S SON to SHADOW’S LURE.

I still could, however, see where he has room for marked improvement.

The first 200 pages of the novel are tight and effortlessly paced. I utterly devoured them. The next 100 pages after that lagged, and seemed more scattered than the beautifully woven first half of the novel. There were clarity issues regarding who is present in certain scenes–to make a video game reference, it was like the novel had “texture pop-in”, but in terms of character rather than scenery. Suddenly a character was there talking when I thought the main characters were alone. It’s distracting.

The final 100 pages, including ending, are pretty awesome all the way around. We get some great resolution as well as a solid direction for each of the main characters. I love the little twist thrown in at the end to make the love story not so tidy. Sprunk also gets rid of a metaphorical crutch Caim was using while making him more powerful. Even the villain was way better than the one from the first novel. The setting is way more realized.

As you can see, I liked SHADOW’S LURE a lot. It was a fun, fast, action-packed novel that left me eager to read the follow-up. There is a lot riding on book 3, SHADOW’S MASTER, and SHADOW’S LURE has given me a ton of confidence in Sprunk’s writing ability. I absolutely can’t wait.