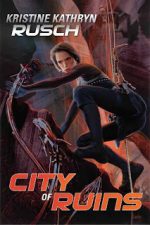 Back in 2009 we read Kristine Kathryn Rusch’s DIVING INTO THE WRECK. With its incredible accessibility to all sorts of readers and its awesome idea of wreck diving in space, it instantly became one of our favorites that year. We waited patiently for the sequel, and it finally came out.

CITY OF RUINS (Amazon) follows up a bit after DIVING. Boss is back, and this time she’s made a company that investigates the stealth tech discovered in the first novel. On a hunch she heads to city of Vaycehn to investigate the possibility of stealth tech on the planet. With her are a slew of historians, archeologists and the other six people who can safely navigate the stealth fields. The people in the city are suspicious, and the city itself falls victim to a weird phenomenon called “death holes” that swallow whole sections of Vaycehn. It’s partly the mystery behind this city that makes the book so enthralling.

We were worried. It’s a kind of paranoia we have. We tend to assume that the second book in a series—especially when following such a pleasantly surprising one like DIVING—will fail to live up to the quality of the first. It’s a legitimate fear. CITY OF RUINS takes place nearly entirely on a planet. Our initial thoughts were, “Well crap. The whole reason we liked the first one was because of the deep-space wreck diving.” What would happen when Rusch took that away?

We were absorbed into the story within a few pages, and then when the major “twist” type moment happened about 1/3 through the book, we were absolutely sold. Not only was this as good as the first novel, it was better in every way. We mean it. Every. Single. Way.

CITY OF RUINS is a perfect evolution of this series. Everything you think you know about this universe is stood on its head and spun a different way.

The writing is better. The pacing is fluid and effortless. You may recall from our review of DIVING INTO THE WRECK that Rusch’s first novel in this series felt more like a couple novellas stuck together rather than a true novel. CITY OF RUINS has none of those problems that slightly knocked the first novel. What’s more is just how easily Rusch recaptured our imagination. How? With her main character, Boss. She is a fantastic example of a strong female protagonist that has baggage and flaws. Boss’ obsession with finding more stealth tech (including the reason behind her obsession) not only gives the character depth, but the universe as well.

One of the real awesome parts of this novel is just how much is really brewing beneath the surface. Without giving anything away, this is the novel that really makes you ask the question, “What is really going on here?”

CITY OF RUINS is a perfect evolution of this series. Everything you think you know about this universe is stood on its head and spun a different way. Even the slow bits of the novel were extremely interesting. What more can a guy ask for? Remember, we don’t particularly care for Science Fiction. But this series? We’ll gobble up every story in this universe that we can. Twice.