Review: Diving into the Wreck 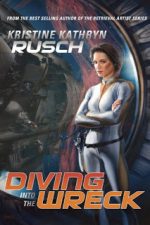 Every now-and-then a novel surprises us. For whatever reason, we have preconceptions about a novel before reading; it could be we’ve read the author’s previous novels, it could be the cover-art, or really anything else for that matter. What we love is when a novel shatters all of our unfounded notions, and completely sucks us into the story (if this were a vampire novel, we would insert a mandatory pun here, but alas…).

Kristine Kathryn Rusch has been writing SF for a while now (not to mention every other genre under various pen-names). You may have heard of her, and you may have even read her Retrieval Artist series. It is a decent series, and good for beginners in the SF genre, but nothing that made us squeal and say, “Wow!” That was our exposure to Rusch, and really the basis for our opinions of her writing. We figured that her new novel, DIVING INTO THE WRECK (Amazon), would be more of the same.

Wow! (See what we did there?) We were seriously mistaken. Take a screen-shot of that last sentence, ladies and gentlemen, because it rarely happens.

DIVING INTO THE WRECK is essentially deep-sea wreck diving… in space. It’s an interesting idea, but not completely original. However, as is becoming the case lately, it’s all in the execution. Also, not only does Rusch throw in the wreck diving in space idea, but in addition she throws the ever-prevalent theme of stealth technology into the mix. We know what you are thinking. We thought it too. “Oh noes! More unoriginal stealth ideas!” Remember, it’s all in the execution.

The story begins with the main PoV, Boss (a female), finding a wreck in the depths of space that is of old-earth design. The wreck shouldn’t (as is fairly typical with these types of discoveries) be there–in fact it should be impossible for the ship to be in this section of space. What follows in the story is essentially the consequences Boss faces for finding and trying to explore this wreck. The setting and history of the galaxy is revealed piece by piece, and we really felt like it added to the mystery of the situations. Authors frequently play the “withholding information” game from the readers, and it can be absurdly annoying. Not so with Rusch’s DIVING INTO THE WRECK.

The characters are quite good in this story. Each of them have their own pasts which lend well to the plot and to the conflict. The novel is actually fairly grim in places, which pleases us (big surprise right?). The dangers the characters face feel real, and the PoV, Boss, makes many observations about her profession that really emphasize how badly things can go (which they do, and often). While the entire story is told from Boss’ PoV, we get some great moments of character development for the secondary characters that truly fleshes out the story.

Kristine Kathryn Rusch's DIVING INTO THE WRECK is exactly what the SF genre needs to get more readers...and to keep the readers the genre already has.

We really want to tell you why the stealth technology in this story is great, but that would spoil a lot of the fun. Look, we know you trust us. The idea here isn’t as cliched as you expect it to be. Go grab the book and see for yourself.

Now, no book is without problems. DIVING INTO THE WRECK does suffer a tad from feeling more like three connecting novellas. To be honest, it wasn’t until the end of Part 2 that we realized there were connections between the sections. This could be a real turn-off to readers. Also, the very end feels convenient and coincidental. It solves the situation perfectly… but it is WAY too coincidental (you’ll know it when you read it).

However we can forgive these faults due to the awesomeness of the book as a whole. The characters are great. The story takes ideas that are typical of the genre and makes them interesting and entertaining. The writing, in our opinions, was much better than her normal fare. The story is told from the 1st Person perspective, but it is entirely present tense–and it is refreshing.

Are you getting the common thread of this review? What you should have noticed by now is that Rusch takes tired or unoriginal concepts and somehow executes ALL of them in the best possible way (with the ending being the one small detractor–but hey, it probably won’t bother most people). Like Patrick Rothfuss’ NAME OF THE WIND, it is the WAY that the ideas are expressed that makes them so good. DIVING INTO THE WRECK might be the best use of the specific SF ideas it contains.

We are going to be completely candid here. You know what the Hugo Awards are, right? Well, DIVING INTO THE WRECK should be nominated for one. So often recently the SF novels nominated for Hugo awards are extremely inaccessible to the masses. It has become a contest of “who can be the most bizarre,” or “who can pander to fans the most,” or even “who can make you feel the dumbest while reading.” Having read a lot of the recent Hugo nominated novels, it’s our opinion that books that are actually GOOD are left off the list. DIVING INTO THE WRECK is a novel that is a fantastic read, and can be enjoyed by the mass SF enthusiasts and newbies alike. Call us crazy–actually, don’t, because we aren’t–but we think the novels that are nominated for the Hugo Award should get people INTO the SF&F genres, not drive readers away. Kristine Kathryn Rusch’s DIVING INTO THE WRECK is exactly what the SF genre needs to get more readers… and to keep the readers the genre already has.

Buy and read this novel. It is easily worth its cover-price. It will surprise you with its depth, and its enjoyment factor. If it doesn’t get nominated for the Hugo, we will be disappointed in WorldCon attendees everywhere.