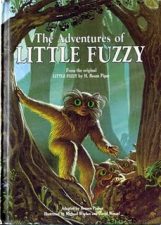 LITTLE FUZZY (Amazon), the Hugo-nominated novel by H. Beam Piper, has been getting a lot of attention recently since fan favorite author John Scalzi wrote a novel-length, Tor-published piece of fan-fic rebooting the series. Scalzi has said repeatedly that he hoped that his reboot would in turn send attention back to the original works and that people would read those books that Scalzi himself loved.

For me it worked. The book LITTLE FUZZY is available for free from multiple sources online (Amazon Kindle free version) and since I had pre-ordered Scalzi’s book FUZZY NATION (EBR Review), I thought it would be fun to read the original work and have a kind of book double-feature reading experience.

It didn’t take long to get through LITTLE FUZZY, it’s very short by today’s standards, and was a quick and easy read. It was simple, and it was fun.

Jack Holloway is a surveyor on the alien planet Zarathustra working for the large corporation that is exploiting the planet of its natural resources. There are several alien species on the planet, Prawns, lobster-like creatures that are a real menace to the humans and others. Jack’s life is turned upside-down when a Fuzzy, an up-to-this-point undiscovered species, enters Jack’s life. The Fuzzy, the only name suitable that Jack can think of, is a small cat-like creature that walks on its hind legs and uses tools to kill and eat the Prawns that are around Jack’s home. The more Jack spends time with the Fuzzy, including the Fuzzy family that moves in with him, the more Jack sees that these creatures aren’t merely smart on the level of chimps or dogs, but could very well be a sentient species. IF the Fuzzys are sentient then the corporation Jack works for could lose their rights to strip mine the planet and could lose vast amounts of money. Surprisingly the book consists mostly of a large courtroom battle to determine the Fuzzys’ supposed sentience.

Let's be honest here, Piper's main goal in LITTLE FUZZY was to talk about what makes us different from animals.

Reading LITTLE FUZZY was an interesting experience. Most of the books dating back to when this book was written (1962) that I’ve read have been Hugo award winners. Some of those books have dated well and others haven’t. This one, in my opinion, fits right in the middle. There were parts of it I liked very much. The back and forth of the court was very good as well as the various arguments about the Fuzzy’s level of sentience. If you enjoy reading Isaac Asimov’s work then this book should be right up your alley. LITTLE FUZZY, like Asimov, deals mostly with conversations between characters. The interest lies in the problems presented and the logical, if not obvious, manner in which those problems are solved. If, however, you are looking for a book packed with action and adventure, then I would steer clear of this one.

And that’s the biggest thing I see as dating this book. It felt slow and lacked some of the dramatic tension I’m used to now. There are problems, but they seem small. There was some worry, but not much. The Fuzzys themselves disappear for a brief part of the book, but it never entered my mind that they were in any real danger or that they wouldn’t return.

Let’s be honest here, Piper’s main goal in this book was to talk about what makes us different from animals. What is that that defines us as a thinking sentient species. In that, Piper succeeded very well. The rest of it is just a vehicle for that discussion. The characters seem very flat and are only interesting in progressing that discussion. The Fuzzys themselves are cute, adorable creatures, and I mean they are so cute that Walt Disney himself would throw up over how adorable they are. Is it a bit much? It was for me.

In the end it was a fun read, and I couldn’t complain about the price. It was an interesting study for me to see what Science Fiction was doing and concerned about 50 years ago. Well worth your time.