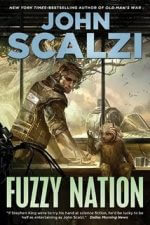 FUZZY NATION (Amazon) is a book unlike anything I’ve ever read before. It’s the reboot of a classic Science Fiction franchise—a retelling of the original, LITTLE FUZZY (EBR Classic). It follows the story of the original in a loose sense, yet tells that same story in a completely new way. It’s fan fiction… in a good way.

Like its originator, FUZZY NATION tells the story of one Jack Holloway, a man who discovers a new race of creatures, the Fuzzys, and befriends them. The creatures show remarkable intelligence and the issue of whether or not the Fuzzys are in fact sentient beings becomes the main focus for the book. If the Fuzzys are sentient, thinking reasoning beings, the consequences to the large mining corporation that own the planet could be catastrophic. That could be a summary for both books, the original H. Beam Piper Hugo-nominated novel, or the recent Scalzi reboot. How they go about that story is completely different.

The first thing Scalzi does is get rid of every character in the Piper original, except Holloway. He then populates the world with a fresh set of faces, new backstories, motivations and character quirks, Holloway included. I agree with this 100%. One of the bigger flaws of the original, in my opinion, was the characterization. All of the characters were simply talking heads useful only to have various arguments on the Fuzzys’ intelligence. In LITTLE FUZZY there were several times where I lost track of who in fact was speaking to whom and it didn’t really matter. What mattered to Piper was the argument. Scalzi has taken a different road. The argument is still there, still important, but so are the motivations behind it. These characters have life, have needs, have character. Holloway’s ex-girlfriend has a major role, as do the local thugs, the heir apparent to the major corporation and others. Even the fuzzy’s in the book have been re-purposed.

The other thing that Scalzi does is give the story a sense of adventure and a bit more of a modern sense of pacing. LITTLE FUZZY was a treatise on sentience, an enjoyable treatise, but a treatise nonetheless. In FUZZY NATION, Scalzi ups the tension, the pacing, and throws in a splash of action for good measure. The end result is a much more enjoyable reading experience that suits my personal tastes much better.

I'm not sure if FUZZY NATION was the novel I wanted Scalzi to write, but it's hard to argue when you get something so enjoyable as a result.

Like all of Scalzi’s books, this one was easy and effortless to read. The pages flew by and I finished the book within a few days of getting it (quite a compliment with how busy my schedule is). Scalzi prefers to let the characters themselves describe who and what they are. Everything is learned from dialogue and action instead of long sections of exposition. And he makes it all seem so easy. I mean really? This is just what he writes when he needs a breath of fresh air? If only more authors out there said, “You know what, I’m kind of bored. I think I’ll write an interesting intelligent page turning SF novel. You know, just for kicks.” The world would be a better place for it.

I’m not sure if this is the novel I wanted Scalzi to write, but it’s hard to argue when you get something so enjoyable as a result. I’m a big fan of his Old Man’s War universe and an even bigger fan of THE ANDROID’S DREAM (Amazon). Scalzi hit the nail on the head with this one, keeping all of the fun and warmth of the original series while adding a touch of the new and making it in my opinion and even better novel than it’s predecessor. Enjoy.