Review: The Devil in Green 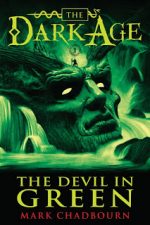 I like avocados. A good one will leave you longing for more without much effort. Soft, green flesh, that great nutty flavor, and all it needs is a bit of salt to provide, quite possibly, one of the finest snacks on the planet. Yum. I’m always on the lookout for some good Green.

So I’d heard all sorts of coolness associated with Mark Chadbourn before finally getting to read any of his books, and as it ended up, this one was my first. Chadbourn’s a novelist living in the UK that got picked up by Pyr recently, and if you’ve been anywhere near their booklist in the last year, you would have had a hard time missing his name. Seven books of his have come through the Pyr imprint in the last fifteen months and all of the covers have been absolutely full of win (Imitation being the best form of flattery, I thought I’d throw a bone in the direction of the overlords here). Thus, I gathered my salivating palette and dove into the book with great amounts of gusto.

THE DEVIL IN GREEN (Amazon) starts out with a bang and flash. Mallory, the existential hero of the story, is ripping down an old road in a Porsche with the hopes of finding someone alive in the next town, when he catches up to a man galloping down the road on a horse. The man’s being pursued by a pack of man-sized orangutan-looking beasts, with the faces of children and wicked sharp teeth, that speak lies to depress and demoralize you before ripping your head off for lunch. The man on the horse is Miller, and the two fight through these nasty freaks-of-nature, ending their flight within the ruins of a castle/church, high on a lone hilltop, where they are safe for some reason unbeknownst to them. The next day, they travel to a town Miller suggests, where a branch of the Catholic Church has supposedly taken over a cathedral and is recruiting people to become a modern set of Knights Templar. Or possibly just giving people free lunches.

As I mentioned above, I haven’t read Chadbourn’s previous trilogy, The Age of Misrule, but what I gleaned from the net was that it included beasts and mythology from Celtic legend that have come into the world we know and left chaos and destruction in their wake. With this kind of setup and the opening chapters of Devil in Green, I was ready for a seriously good ride. Like say, something akin to The Matterhorn or even Indiana Jones. Unfortunately, I didn’t get anything near either of them.

Chadbourn actually writes quite well. His prose pulled me in and had me swallowing things very easily. He has some relatively interesting side characters, a realistic feel to the setting, and enough sarcasm to outstrip Simon Cowell on a bad hair day. I love sarcasm, don’t get me wrong, but if there’s no other reason for me to like a character they get old really fast. Also, Chadbourn writes the mundane stuff very well. I never got tripped up by anything when the story was plodding along from one excitement to the next; it was only when things got a little crazy that I had questions. Like, for instance, throughout most of the climax.

In the end, my difficulties with the story boiled down to two big issues. The first was the fact that it felt like nothing happened for the entire book. Nothing. This was because the main characters didn’t do anything significant of their own volition. They were forced out on a few forays by their religious superiors, and some people got killed in messy ways, but it never felt like there was a real plot or point to the book–no forward progression that I could see. The fairy people get introduced, though they’d supposedly already come into play in the first trilogy so this was nothing new. There’s a dragon that attacks the cathedral a few times (Though it’s only ever referred to as a “fabulous beast”. Why? No idea. Call an elf an elf, I say), but the thing makes minimal impact to the structure before [***Censored***] (Seriously, guys? Oh yeah. No spoilers. Umm…) There’s some kind of love interest for Mallory, a girl from outside the complex that communicates somewhat with the fairy people, but there’s no real progression there either–just some sort of vague sense of romantically jumping from one step to the next until [***Censored***] (Aww, come on. That wasn’t such a big one to give away…). About 250 pages in, Miller asks the main character, “What’s your motivation, Mallory?” I thought this a very appropriate question, and one I would have liked an answer to. Unfortunately, there was no answer to be had.

THE DEVIL IN GREEN had so much potential, but also so much emptiness.

The second issue I took with the story is the excessive harping on the stupidity of those that ascribe to any particular religion. I could understand if there had been some bashing. I could even have put up with lots of it if said bashing would have been specific, or added something of value to the story or the characters. That’s not what this was though. This was simply a blatant generalization of all religions as being bad and those involved with them as being incompetent morons for believing. So, I did a little research, and it looks like something on the order of 85% of people in the world believe in giving worship to some kind of greater being through the religion of their choice. That’s an awfully large majority to be preaching against, and that’s exactly what it comes over as. There did seem to be some small part of the story that tried to show how following church leaders (or anyone for that matter) without thinking for yourself, would lead to destruction, chaos, and death. This I can see. This I could have sympathized with. But I couldn’t swallow everything I got fed here. Not by a long shot.

In the end, I can’t say that I liked the book very much. It was empty; Green, yes, but empty. I waffled over my thoughts about it for a long time because there was so much potential to be had. There’s still potential for the next two books, I think, based on the material he has, if he’ll just use it. If there’s another book like this though, I might just have to bail on the series altogether. So for you, instead of reading this one, I’d suggest trying a different book of his (A reliable source has suggested that some of his other books are much better), or that you buy an avocado. Nice, dark skin; gives slightly when pressed upon; not too soft; lots of nutty goodness. Plenty of “Green” to satisfy your craving there, I’d say.

So let it be written.

So let it be done.