Review: The Queen of Sinister 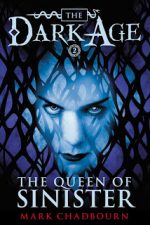 THE QUEEN OF SINISTER (Amazon) is the second book in the Dark Age Trilogy by fantasy author Mark Chadbourn. This trilogy is the second of three that tells of the time when the boundaries between our world and next have run thin and allowed Celtic gods and nightmares of legend to cross over. If you caught my review of THE DEVIL IN GREEN (EBR Review), the first of this trilogy, you’ll probably understand that I was a bit hesitant going into this book. Like a good reviewer though, I dove into it with my eyes and arms open, hoping for some goodness, because I just love you that much. Ah, the things we do for you…

THE QUEEN OF SINISTER starts off completely different than its predecessor. Where Devin in Green had a car chase, a galloping horse, and a host of nasty bad guys, Queen starts off with a whole host of people dead, a plague ripping across the countryside, and the poor doctor that is torn up that she just can’t do more. I loved the fact that it looked like we were going to get into character in this one. Everything swirled around our doctor-friend, Caitlin Shepherd, and how she was dealing with the mess of a newly mangled world. Then Frank Crowther shows up and says that Caitlin has to come with him, to cross to the other side and help him find a cure for the plague. A quest! To say I was interested would be putting it mildly. Movement! Purpose! Exactly the things that were missing from the last book.

Despite the fact that I liked the opening sequence, I was quickly disappointed by what followed. The cast got pretty large, rather quickly, and I soon found myself wondering why all these people were acting the way they were. In what I read, there was little consistency of character to be found, unless it was the fact that they would all stop and stare agog at the psychedelic colors of some vista or other. I still wanted to see what the end held though, so I did something that I’ve never done before: I gave up on the characters and read the book just for the scope; go in for the ideas and the imagination, for the wonder of the thing. In stepping back, I found that I began to like the book a bit more. It became more of an adventure book, with unknown perils and creepy spies. I just had to remove myself from caring about what the characters were doing. Or in understanding their logic. Or in seeing how one event naturally led them to the next conclusion. Okay. I guess I can do that. Do any of you like books this way though? I don’t. Even though there was purpose, the whole thing felt wide open. It seem like a lot of bad stuff happened because that’s the way the world is. But I was okay with it. I may have even been able to finish it all with this somewhat positive outlook, but the end flipped back around and gave me a character/emotional ending.

And I didn’t care in the slightest. Augh!

In the end, this book seems to have given its readers three things:

1) A wider view of the world as it “really is”, including some crazy stuff from the other side—in other words, a whole lotta world-building;

2) A setup for Ms. Caitlin to become a Daughter of Dragons (though by the end I still don’t know if this was even accomplished or not);

3) Solid proof/evidence that mankind is lazy/selfish/crappy, and without helping/goading/forcing from the gods of the Celts, we’d simply never make it. Positively sucks to be us.

THE QUEEN OF SINISTER starts out ok, but quickly loses steam. Alas.

On this end of things, I can see that a lot of these three things were in THE DEVIL IN GREEN as well, and I’m not so sure that I’m liking the trend here. Maybe though, it’s because I’m not the one doing the manipulating. I certainly have no qualms against pointing any of you in the right direction when necessary… ((Evil chuckle, dry-washing of hands))

Chadbourn’s prose is still good here; world-building, something to be noticed; characters, not much to root for; over-arching story, fairly lackluster. If you’re into books that you can skim through without much involvement, are into it for the author’s imagination, and are looking for a quick read, this book will probably fit right into Slot C (for cool) with you. For me, it was more like Slot I (interested) to A (annoyed) to R (removed) to H (humbug!). I liked some of it. The rest just made me mad. Loads better than its predecessor, but not by enough to matter.