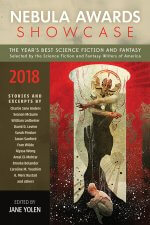 When I mentioned to my husband that I was reviewing the NEBULA AWARDS SHOWCASE 2018 he asked: isn’t the fact that all of these pieces were nominated for an award a review in and of itself?
It’s not a bad question. But I think the answer is only: sort of? Anthologies are are hard. Even anthologies where the stories have all been previously vetted can feel bloated or uneven. In fact, I haven’t picked up an anthology in long time for these two reasons–the last few I read felt like a lot of panning and sifting for very little gold. So even with the words “Nebula Awards Showcase” emblazoned across the front I was skeptical.
And I was wrong. This anthology is full of strong pieces, both short stories and novelettes, as well as (unfortunately, but probably inevitably) excerpted novellas. Jane Yolen, who was the editor of this anthology, faced a tough job but I felt like the pieces she included from the awards spoke to the breadth and depth of the field. She arranged the […]Read the rest of this review »