Review: The Wolf of Oren-Yaro 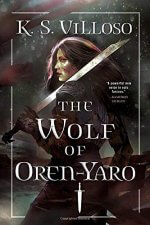 THE WOLF OF OREN-YARO (Amazon), originally self-published back in 2017, fought its way to the top of the fantasy charts on Amazon, catching enough people’s attention along that way that Orbit plans on publishing a trade paperback version in February 2020.

So what’s the hype about?

Well, THE WOLF OF OREN-YARO is an epic fantasy with world building elements pulled from a variety of Asian countries and a compelling female protagonist.

Talyien has ruled the country of Jin-Sayeng for the last five years. Her husband Rayyel was supposed to be her co-ruler, their marriage uniting the warring clans of their country and bringing peace.

If only it were that easy.

Rayyel walked out on Talyien the night before their coronation; now, five years later, he’s contacted her and proposed meeting in the foreign city of Anzhao to discuss important business. Talyien is intrigued and terrified, angry and hopeful. When she arrives in Anzhao, she also suspects that she’s out of her depth, politically and personally. The meeting with Rayyel goes terribly; specifically in the ways that meetings interrupted by assassins tend to go.

After barely escaping with her life, Talyien is left alone in a foreign city, without money or guards, and a sinking feeling that her throne and her child she left behind might not be as safe as she thought. Talyien must learn to survive on her own, ask for help, and figure out the mystery of what’s really going on in her marriage, her past, and her country.

THE WOLF OF OREN-YARO kept me guessing, both plot and story-wise. The plot is intricate, with short and long cons, and plenty of assassins and flashbacks, so that the narrative requires a good amount of attention. There are opportunities here where Villoso could have smoothed some of the connecting threads for readers, including a few twists at the end which, while surprising and fun, could have used a tad more telegraphing. What’s the saying? The ending should feel surprising but inevitable? It was surprising and logical, but the inevitability could have been signaled more clearly.

THE WOLF OF OREN-YARO contains intrigue, charming rogues, terrifying queens, and a meditation on the difficulty of knowing yourself.

Story-wise, I really enjoyed that I was never quite sure where Villoso would take Talyien next. When I read the synopsis, I assumed the novel would be mostly courtly politics and intrigue. However, instead of playing the great game on her home turf, Villoso ruthlessly isolates Talyien from her own support system. As a warrior-queen, Talyien is experienced in battle, but not at being alone or struggling with assassins, slumlords, and a host of other colorful characters. Her unease and isolation allow Villoso to focus on Talyien’s personal struggles; specifically, admitting and owning her strengths and weaknesses as a woman and a ruler.

Talyien is very human, and the novel is written entirely from her POV. We are also introduced to Khine, an immigrant to Anzhao and a likable rogue with a heart of gold. This is a trope that I’m always HERE for, and I loved his interactions with Talyien. We see little of Talyien’s husband Rayyel other than through flashback, but Villoso builds an interesting portrait of their relationship. There’s a large-ish cast of secondary characters, including old guards, old lovers, and new enemies. All of these felt flatter. Villoso has a light hand on character description, which can be a good thing, but in this instance made it hard for me to picture or recall many of the characters.

In THE WOLF OF OREN-YARO, K.S. Villoso has introduced readers to a broken and complicated nation and queen. She also gives readers an exploration of the tension between our past and our present selves, the difficulty of finding the truth when we’ve blinded ourselves with our own narratives, and the price to be paid for believing our own stories.

I’m genuinely interested to see more of Talyien and her journey.